What are the effects of 6.2 mmol (400 mg) acute nitrate supplementation on Yo-Yo IR2 test in female and male hockey players?

Beetroot juice, a natural ergogenic aid, can decrease the amount of oxygen required for a given exercise. The effects of beetroot juice have been tested on male cyclists and cross-country skiers. However there is limited research regarding the ergogenic benefits of nitrates for hockey players or women of any sport.
Purpose: To test the potential aerobic benefits of beetroot juice on male and female DIII College hockey players using the Yo-Yo intermittent recovery 2 test.
Methods: IRB approval and informed consent was obtained before testing started. Seven female and nine male varsity hockey players completed a double-blind, crossover design study. Participants consumed single dose of 6.2 mmol of concentrated, nitrate-rich beetroot juice or nitrate-depleted beetroot juice (Beet It; James White Drinks Ltd., Ipswich, United Kingdom) 2.5 hours prior to completion of a Yo-Yo IR2 test. The Yo-Yo IR2 test is an aerobic test that measures the ability to perform repeated exercises while utilizing a large contribution from the anaerobic system. Participants continued the Yo-Yo IR2 test until they were unable to keep pace with beeps. The total distance completed during the test was recorded. The Wilcoxon signed rank test was used to determine statistical significance within the individual teams
Results: Total distance completed was 10% greater in males with the nitrate-rich beetroot juice (667 ± 174 m, p = 0.022) and 17% greater with the nitrate-depleted beetroot juice (724 ± 175 m, p = 0.014) compared to the control group (600 ± 151 m). Total distance completed by the females was not significantly different for either the nitrate-rich beetroot juice (446 ± 127 m, p = 0.612) or the nitrate-depleted beetroot juice (491 ± 149 m, p = 0.091) compared to the control (457 ± 140 m).
Conclusion: A single dose of beetroot juice with 6.2 mmol nitrates did not significantly improve aerobic performance as measured by the Yo-Yo IR2 test in hockey players.  The product Beet It allowed for successful blinding and provided the nitrates in 70 mL; perhaps supplementation over an extended period of time could reveal different results. A limitation was the BRJ was provided to the players to take at the appropriate time prior to testing; perhaps some players did not consume the product. 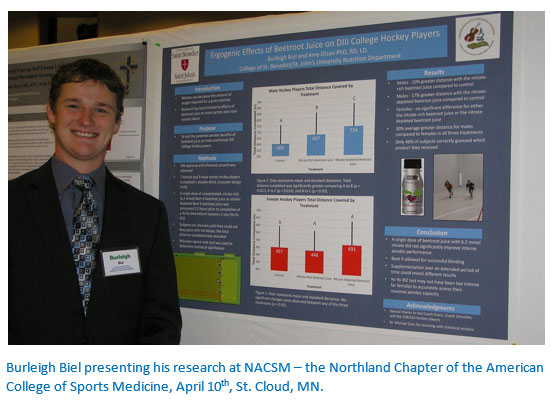 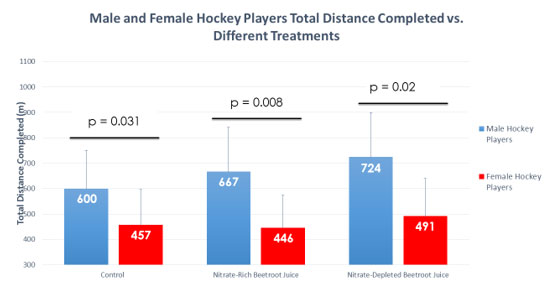