Effect of equivalent amounts of dietary calcium from soy milk vs. dairy products on body composition

Current studies have shown dietary calcium to modulate adiposity in both human and rat subjects. Dietary calcium suppresses calcitriol, which in turn reduces adipocyte calcium ion concentrations (Ca2+), suppresses lipogenesis, and increases lipolysis during caloric restriction. Dairy sources of calcium show approximately 60% greater effects than other sources of calcium such as calcium carbonate. The different effect of dairy vs. supplemental calcium is likely attributable to additional bioactive compounds in dairy products that act synergistically with calcium to modulate adiposity.

This study was designed to investigate whether equivalent amounts of calcium and vitamin D provided by different food sources had different effects on lipolysis in humans. Participants in the study were between the ages of 18 and 55 and divided into one of two groups; soy or dairy.

Both groups were asked to consume 3, 8 ounce glasses (24 ounces) of either dairy milk or soy milk each day for 6 weeks to determine whether calcium from a dairy source increases lipolysis and suppresses lipogenesis significantly more than calcium fortified soy products, as determined by changes in percent body fat measured at the onset and completion of the study period. 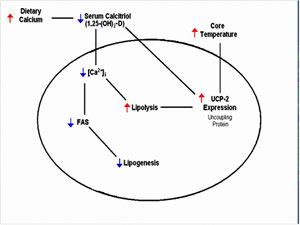 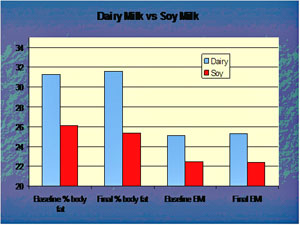