Caffeine was recently removed from the banned list of the International Olympic Committee, but the NCAA still has banned limits in the urine of 15 μg/ml. It is inexpensive, readily available, safe in effective doses, and socially acceptable. Caffeine has an ergogenic benefit in endurance sports, but it is also a diuretic, which could contribute to dehydration.

Purpose: To determine if a dose of 5 mg/kg of caffeine enhances endurance performance without a considerable increase in urine output or exceeding NCAA limits.

Methods: Twelve college varsity (seven males/ five females) cross-country skiers received one liter of Gatorade ± 5mg/kg of caffeine. The subjects completed two trials on roller skis, on an outside course, until they could no longer maintain the pace at 85% of their max heart rate determined by VO2max test. Individual urine samples were collected for the first 12 hours and a total for 24 hours. Urine output, osmolality, and specific gravity were measured to assess hydration status. Caffeine excretion in urine was measured for all individual samples for the 12 hours after exercise. Data was analyzed for significance by (P < 0.05) and (± SD).

Conclusions: While it appears there was a 20% increase in endurance with caffeine, due to the limited number of subjects, it was not statistically significant. Urine output in the first sample within 30 minutes after exercise was 2.5 times greater with caffeine, but at 12 hours there was no significant change in any parameters of hydration. Peak urinary caffeine excretion was above the NCAA banned limit for 66% of the athletes. A majority of athletes could detect the presence of caffeine due to taste or physiological effects; therefore, the study was not truly double blind which may have influenced results.

John Schapman presented his research at the regional meeting for the American College of Sports Medicine and was awarded third place in the student research competition which includes graduate student research. In the picture below, John (in white shirt) is begin given his award. 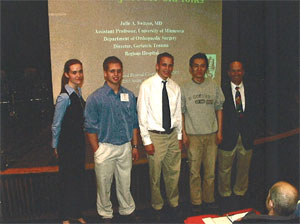 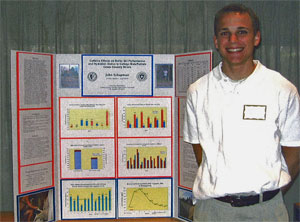 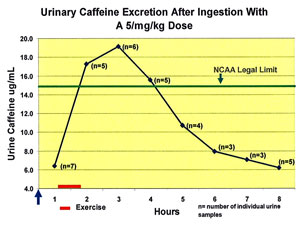