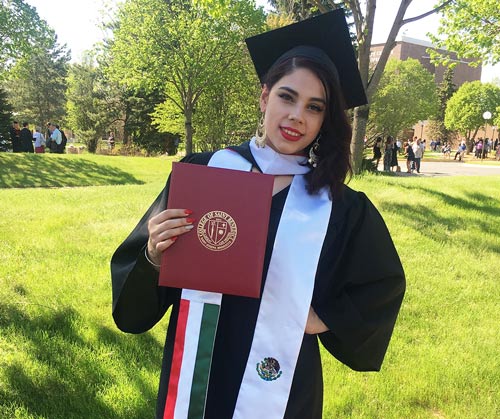 Yariset Rodriguez ’17 will be able to add South Korea to her list of travels as she serves in the Fulbright English Teaching Assistant (ETA) Program.

Although she has traveled to India and Japan, Korean films and television dramas on Netflix have captivated Rodriguez’s imagination since her first year at the College of Saint Benedict. Since watching these films, she has taken to learning more about the culture through food, cosmetics, and her own studying.

“After watching so many dramas, the sounds of the language and cuisine eaten by characters seemed so enthralling. I wanted to visit immediately, but being from a low-income family, travel for leisure is almost always out of the question,” Rodriguez said.

The opportunity to live in South Korea is no longer out of the question. Rodriguez left for South Korea on July 7, and will not return to the United States until July 2018.

Rodriguez will participate in a six-week orientation process to acclimate her to Korean culture before teaching. During orientation, she will be informed of her placement and the host-family that she will be living with.

While Rodriguez will miss her loved ones, she is excited to embark on an opportunity of a lifetime. This excitement stems, in part, from the power of the Fulbright program to be a springboard for positive cross-cultural interaction.

“It is imperative to the United States for Americans to be more empathetic to those who are different. I feel this cross-cultural program is not only for the benefit of those we will teach but is very important for Americans to further expand our knowledge of the world,” Rodriguez said. “This experience is one in which Americans will be foreigners in another country and understand the difficulties of navigating an unknown place. This is the greatest benefit to the Fulbright program.”

While Rodriguez looks forward to interacting with other cultures, she is also passionate about spreading her love for the English language and the skills she has learned from the English Department at CSB/SJU.

“My interest in the ETA position derives from … my desire to help others fall in love with the malleability of words as I have,” Rodriguez said. “English is the third most common native language and is the official language of dozens of countries; it is the most learned second language in the world. These stats are fundamental to my role as an ETA, because it will help Korean students learn a beneficial tool in global communication: the ability to speak English.”

While Rodriguez has never been to South Korea, she believes that her experiences studying abroad in both India and Japan have prepared her for adapting to different cultures. Growing up in South Minneapolis also allowed her to interact with people from all walks of live.

“Prior to studying abroad for the entirety of my sophomore year in Japan and India, I had never been outside of the United States and I had never been on an airplane. I decided I wanted to be brave and do something exceptional, and I did,” Rodriguez said. “My year abroad … helped me fall deeper in love with the complexity that is human interaction across borders and nations.”