Editor’s note: This is the second in a series of articles that will appear this summer on the seven CSB and SJU graduates who earned Fulbright English Teaching Awards for the 2016-17 school year. 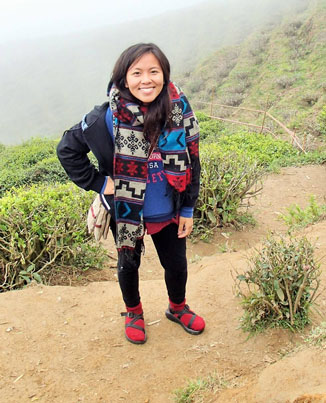 Mai Tong Yang '16 spent one semester during her junior year in India. Here she is in Darjeeling, India.

Mai Tong Yang heard her first South Korean song in middle school. She says it called to her, making her want to learn more.

Now a 2016 graduate of the College of Saint Benedict, South Korea is calling to her again. Yang received a Fulbright English Teaching Assistant to teach English in South Korea.

When she found out about the award, she didn't have to think too long about where she would choose to spend the next year of her life.

"Choosing South Korea was a natural choice for me because of my interests in Korean culture, language and international education," Yang said.

For Yang, helping others outside the United States and learning internationally is almost second nature.

Yang was born in a refugee camp in Thailand, but came to the United States at young age. Growing up, she understood the difficulties of learning English at the same time as learning another language at home.

She spent a year in South Korea while in high school where she found a passion for politics and diplomacy and spent a semester of her junior year at CSB in India. While in India, she had the opportunity to work with a non-governmental organization called Prayasam. With Prayasam, she was able to teach English, much like what she'll be doing in South Korea.

"Every single student there was very motivated to learn," Yang said. "These students taught me the value in teaching but also in learning as well. The students are a major source of motivation to continue teaching."

Yang, who majored in political science while at CSB, is looking forward to her time in South Korea and recognizes that her time there will be two-sided.

"I always keep an open mind when it comes to opportunities like this because so much can happen," Yang said. "Not only do I look forward to teaching to students but I also look forward to learning from them as well."

The excitement does not come without nerves, though.

"I am nervous about teaching because I remember being an international student in a Korean high school so it will be different being on the other side as teacher," Yang said.

While at CSB, Yang was a member of Intercultural LEAD, a fellowship dedicated to helping build leaders from first generation and different cultural backgrounds. The people involved in the fellowship played a big role in pushing Yang to try new things.

Yang is one of seven students from CSB/SJU to receive an ETA grant. Her program starts in the first week of July and will run a full 12 months.

CSB and SJU students interested in applying for a Fulbright Award for the 2017-18 academic year should contact Phil Kronebusch, professor of political science and coordinator of competitive fellowships at CSB and SJU, or Jeff Anderson, associate professor of peace studies.