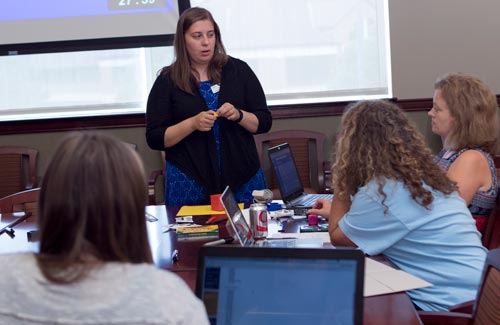 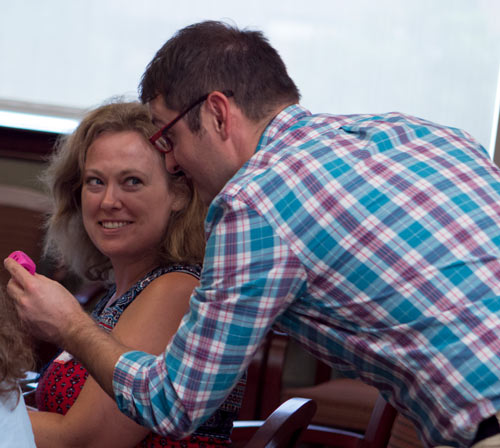 Teachers mentor students. But who teaches the teachers when a new learning technology comes along?

In the case of a 3-D printing workshop July 25 at the College of Saint Benedict, it turns out it was the students.

“I saw a lot of applications to math and science, which is kind of what we expected,” said Sarah Lauer, a rising senior from Rogers, Minnesota, who was one of four students who helped conduct the workshop. “But some teachers also made applications for reading and social studies, which was very cool.”

3-D printers are not new on the CSB and SJU campuses — the first came to CSB in August 2014, according to Konczewski. Now, there are four 3-D printers between the two campuses, he said.

Many K-12 school districts, however, are still newcomers to the 3-D printing process. Fenton estimated that about 15 percent of schools currently have 3-D printers.

Fenton integrated 3-D printing for the first time during the 2016-17 academic year in Elementary Science Content (Education 323). During the fall semester class, she taught college students how to integrate technology and to use the engineering design process so they can actually apply it when they’re out in the classroom.

The education students then followed that up with a spring semester class, Science Pedagogy (Education 334). Students like Lauer taught the 3-D technology to third-grade students at Kennedy Elementary School in St. Joseph.

As their 3-D assignment, the Kennedy students had to design an animal with an adaptation to help it survive, which is a third-grade science standard, and make a 3-D print of the “new” animal. Then, the students had to document what the adaptation was going to do to help the animal survive.

For example, one student took a giraffe and added a second head and long neck to it.

“His justification for a two-headed giraffe is that one head could be looking for predators while the other head could be eating,” Fenton said.

The workshop gave the educators new tools to use in the classroom and get an early start on what Konczewski called “an upcoming revolution” with 3-D printing.

“I think they (the workshop participants) appreciated the one-on-one help, and the handouts, so they can look back once they get home,” Palencia said. “This isn’t a workshop where they go, learn about it and then forget about it when they go home. They have sheets with them, and they’re going to use the software that they can get for free.”

Govern said the workshop “opened the imagination” for educators.

“They’re printing human organs, they’re printing prosthetics,” Govern said. “There’s so much potential there, I think it’s really important to bring it into the schools. If they have experience in this, it might become a new hobby and they might become the next Picasso of 3-D printing.”

More 3-D printing workshops could be held at a later date, Fenton said.

“The people who participated (in the workshop) want more and feel like this is something that we need to continue to offer,” Fenton said.