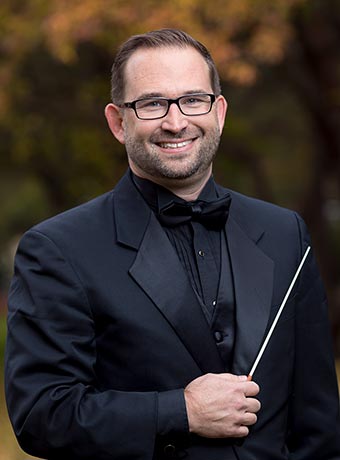 The College of Saint Benedict and Saint John’s University Wind Ensemble will be heard by leading conductors and musicians in the college wind band field.

The Wind Ensemble was selected to be part of the Small Band Program Showcase at the College Band Directors National Association (CBDNA) meeting Feb. 20-23 at Arizona State University.

“It’s the highest national recognition a band at a university our size can receive, to be a part of the Small Band Program Showcase,” said Justin Zanchuk, director of the Wind Ensemble.

The CSB/SJU Wind Ensemble will be one of 14 groups spotlighted at the Showcase Feb. 22. Zanchuk will give a brief introduction of the group before presenting their recording to the CBDNA national conference attendees.

“It is a huge honor that I think every member of the group is proud of what we accomplished,” said Jacob Ford, a senior trumpet player from Fond du Lac, Wisconsin.

Back in December 2017, the Wind Ensemble performed “Traveler,” a 2003 composition by David Maslanka, at Escher Auditorium. A portion of that 13-minute work was submitted to the CBDNA, with all submissions screened by blind audition from a three-member panel.

“‘Traveler’ is an amazing piece that really signifies what we can do as a band, and it captures the attitude of our conductor, Dr. Zanchuk, perfectly,” said Andrea Doty, a junior percussionist from Big Lake, Minnesota. “‘Traveler’ represented a journey that was taken as a band, melding together all the essentials of our ensemble: frantic woodwind lines, swelling brass chords and nonsensical percussion.”

One of the characteristics the CBDNA uses to determine what constitutes a “Small Band Program” is the number of music majors a school has (generally considered less than 100 music majors).

Consider the schedule of Tessa Rahrick, a junior clarinet player from Owatonna, Minnesota, who is a biology major, carries two minors and is a member of the CSB tennis team.

“It is definitely difficult to balance all of this, especially when science labs interfere with our wind ensemble rehearsal time,” Rahrick said. “Justin has been so understanding with students, and realizes that sometimes there are class conflicts.

“Without his understanding, I would not be able to do both,” Rahrick said. “Wind Ensemble is quite a time commitment and it can be hard with my demanding schedule, but it is definitely worth the time management and the work.

“It is one of my favorite parts of being a student here,” she added.

Doty said the Wind Ensemble has a slightly different take on the honor.

“While most people consider achievements and successes as their most honorable moments, the Wind Ensemble takes into account the time and effort that was put in, in order to get to that point,” Doty said. “Before every concert JZ (Zanchuk) makes a point of telling us how proud he is of each and every one of us, how proud he is to be our conductor.

“That gives me more honor, more pride, than any amount of audience members or awards. It is most rewarding to see his smile after a stressful week of concert prep, knowing that we did it, and we rocked it,” Doty said.

It’s the second honor the Wind Ensemble has earned. In February 2017, the group was selected to perform at the Minnesota Music Educators Association’s Midwinter Clinic at the Minneapolis Convention Center.

The group, along with the CSB/SJU Symphonic Band, will perform a concert at 7:30 p.m. Wednesday, Feb. 27 at Escher Auditorium, CSB.

The event is free and open to the public.