People explore their identities in a multitude of ways.

For some, they accomplish this indirectly through careers or personal relationships, while others take a more direct approach through art and writing. The latter is exactly what Iranian-born, Minneapolis-based artist Katayoun Amjadi has set out to do through her exhibit at Saint John’s University.

Amjadi’s exhibit, “S WORD and LETTER TO BABA,” is on display from Jan. 26 through Feb. 26 at the Alice R. Rogers Gallery and Target Gallery, SJU. It is part of the Visual Arts Series at the College of Saint Benedict and Saint John’s University, and is sponsored by Fine Arts Programming.

An artist talk will be livestreamed at 6 p.m. Thursday, Jan. 28.

Amjadi has experienced childhood trauma during wartime, like many other Iranian women of her generation encountered. After immigration to the U.S., she found herself longing for her culture as it was such a significant part of her identity.

Because of her immigration experience, Amjadi explores the common themes of what constructs our perceptions of Self and Other, such as religion, gender, politics and national ideologies. Through this artwork, she strives to make sense of her own identity and the turmoil she has faced while constructing this.

Amjadi has been deeply inspired by the campus of Saint John’s, both physically and emotionally, while creating art for the exhibition.

“With my show in January, I would like to draw on the relationship of art gallery to church, and in a sense, create an experience that makes a correlation between the sacred space of the church and its deeply contemplative nature and the secular space of the art gallery and its reflective nature,” she said.

“To that end, my work will engender some of the features of the classic church architecture of nave, ambulatory and choir, but do so in way that speaks to my concerns as an artist; of humankind’s relation to one another and the role of word and sword, pen and gun in today’s world,” Amjadi said.

S WORD and LETTER TO BABA are companion works which probe the power and efficacy of words and guns in a world consigned to both. S WORD draws from our deep history with the written word and tools of war and presents both as weaponized figures on paper scrolls. LETTER TO BABA is a video work seen as both documentary and diary, at once profoundly personal, yet speaking to universal truth and fear.

“Amjadi’s work is a powerful and timely exhibition specifically designed for the Alice R. Rogers Gallery with its cathedral-like space ripe for contemplation and reflection,” said Gallery Manager Jill Dubbeldee Kuhn. “In it, Katayoun Amjadi installation of hand printed scrolls with printed images of writing materials juxtaposed with various gun images describes the tension between the power of words and physical violence.

“A pen and a gun are dangerous objects only when in the hands of a human. The artist’s exhibition encourages us to ask which one contains the potential for (either) more might or more destruction?” Dubbeldee Kuhn said. 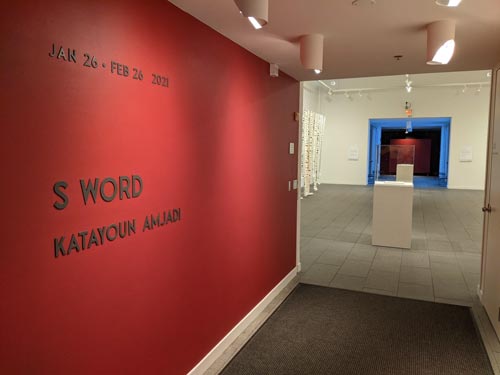 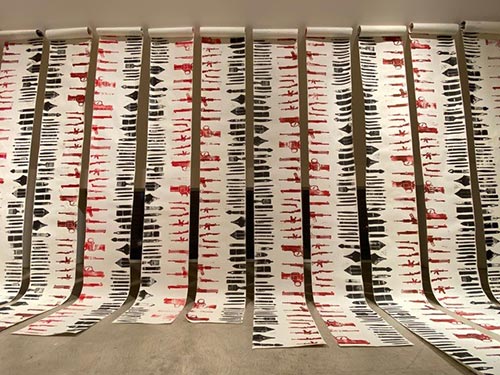 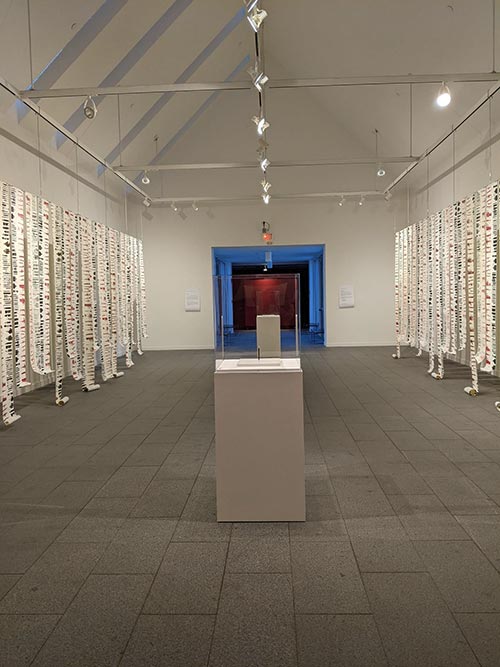 SJU Gallery hours are from 11 a.m. to 4 p.m. Tuesday through Friday. FAEs are available Wednesdays as scheduled; the gallery reserves the right to adjust hours and the number of FAE Wednesdays based upon staffing availability. The gallery is closed Saturday, Sunday and Monday.

More information on the Visual Arts Series is available here.