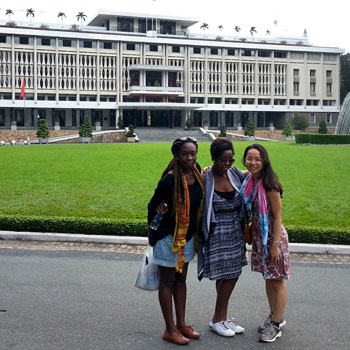 Victoria Adofoli majored in peace studies and political science with the idea that she could fight human trafficking and prostitution, injustices she considers to be modern-day slavery.

She fought for countless women and children while working in Cambodia last summer. Thanks to a new opportunity, she'll be able to return to Southeast Asia in January 2016.

Adofoli, a 2014 College of Saint Benedict graduate, will be heading to Malaysia after receiving a Fulbright English Teaching Assistant (ETA) award. She is one of five CSB and Saint John's University graduates to receive an award from the Fulbright Program for the 2015-16 academic year.

The Fulbright program allows recipients to choose their locations throughout the world, but Malaysia stood out to her.

"I thought about the Dominican Republic but Malaysia just kept popping up in my head, especially with my background in Southeast Asia," Adofoli said.

Last summer, Adofoli worked at the Cambodian Center for the Protection of Children's Rights, a non-profit dedicated to rescuing minors from sex trafficking and abusive situations. She also worked as a manager for the Daughters of Cambodia, which focuses on economic empowerment for victims of sex trafficking.

She was able to work in Cambodia with some financial assistance from the John Brandl Scholarship, a program of the Eugene McCarthy Center for Public Policy and Civic Engagement.

"Everything I've done in terms of major, research, everything has been for the goal to alleviate trafficking internationally, and Cambodia was the perfect opportunity," Adofoli said. "It was a great place to learn about the external and internal forces that cause people to fall victim to trafficking and to learn of the different impact models that international bodies such as the United Nations, World Vision and other NGOs and expats had in response to this international problem in Cambodia."

She was able to see what approaches worked and which ones didn't. Expatriate co-workers told her about similar trafficking problems in Malaysia, and that influenced her decision for the Fulbright placement.

The Fulbright ETA program places U.S. students as English teaching assistants in schools and universities overseas. The U.S. students improve foreign students' English abilities and knowledge of the U.S., while enhancing their own language skills and knowledge of the host country. Participants may also pursue individual study/research plans in addition to their teaching responsibilities.

"I'm not going to Malaysia for nothing; I'm going there to work hard. My primary goal is to teach English, but I'll be there for a long time, and I'm also going to work on what I'm passionate about," Adofoli said.

CSB and SJU students interested in applying for a Fulbright Award for the 2016-2017 academic year should contact Phil Kronebusch, professor of political science and coordinator of competitive fellowships at CSB and SJU.