The man who spent more continuous time in space than anyone in American history is returning to Saint John’s University, his alma mater, and will make a public appearance next week to talk about his experience.

Mark Vande Hei ’89 will be on campus for various events Tuesday and Wednesday, Nov. 29-30, and will appear from 4-5 p.m. Nov. 29 at SJU’s Pellegrene Auditorium in the Peter Engel Science Center to interact with students from the College of Saint Benedict, Saint John’s and interested members of the community. The event, in which he will speak about "Living and Working in Space," is free and open to all.

Vande Hei served on the International Space Station for 355 consecutive days – April 9, 2021, to March 30, 2022 – and conducted research on the effects of long-duration spaceflight on humans as NASA plans to return to the Moon and prepare for exploration of Mars. He has spent a total of 523 days in space during two separate missions to the ISS. Perhaps the most dramatic part of his most recent mission was the fact that he was orbiting with two Russian cosmonauts when the war in Ukraine broke out in February. He returned to Earth aboard a Russian spacecraft, but speculation raged for weeks whether he would be left stranded on the ISS. Despite a war of words between Dmitry Rogozin, the head of Roscosmos, and Scott Kelly, the previous U.S. continuous spaceflight record-holder, Vande Hei landed in Kazakhstan as scheduled.

Vande Hei’s second stay on the ISS originally was intended to last six months but was extended to allow for a Russian movie crew to visit the orbiting complex and, more importantly to NASA, protect against a crew rotation that would’ve left the station without any Americans on board.

Vande Hei, who turned 56 on Nov. 10, was featured in the latest issue of Saint John’s Magazine. He earned his degree in physics at SJU, earned a master’s at Stanford University and taught at West Point. In the U.S. Army, he served several tours as a combat engineer and rose to the rank of colonel. In 2009, he was one of nine astronaut candidates selected from among more than 3,500 applicants and beat out 99.7 percent of them to get into the NASA space program. He has conducted everything from plant research to physical sciences studies and participated in a study to determine if engineered tissues cultured in space could provide a model for studying muscle loss and assessing possible treatments prior to clinical trials. He also participated in harvests of peppers grown in space to study the challenges of growing plants in microgravity, which could help crews grow their own food on future long-duration missions.

In addition to his public appearance, Vande Hei will speak to the Rotary Club of St. Cloud at noon on Nov. 29 at the Holiday Inn. He also will have dinner with CSB and SJU President Brian Bruess and meet with ROTC cadets. 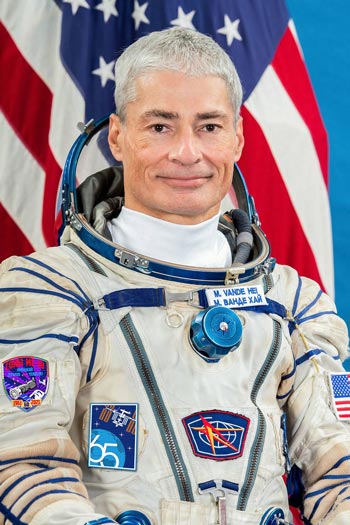