A rookie no more: Vande Hei returning to ‘job’ on ISS

When Mark Vande Hei thinks back on his first mission aboard the International Space Station, it’s the view that stands out more than anything.

He remembers seeing the Earth from above and realizing how thin the barrier that separates us from the rest of the universe truly is.

“I could never get enough of looking out the window,” recalled the 1989 Saint John’s University graduate, who spent 168 days in space and conducted four spacewalks as a member of the Expedition 53/54 crew from Sept. 13, 2017 to Feb. 28, 2018. “You don’t always have a window in your view when you’re working. But when you do, it’s so incredible to see.

“Sometimes you don’t realize it when you’re standing on the surface of the Earth, but from space, you see our atmosphere is just this thin, fuzzy layer of varnish really. It’s almost nothing in the grand scheme of things. When you look up into the night sky, you’re staring straight into space.

“And being up there makes you realize that between here and there is not that long a distance at all.”

But it is a distance Vande Hei is ready to travel once again.

Earlier this month, NASA announced he has been assigned to an upcoming mission to the ISS as a flight engineer and member of the Expedition 64/65 crew. Vande Hei and Russian cosmonauts Oleg Novitskiy and Pyotr Dubrov are scheduled to launch their mission on April 9 aboard the Soyuz MS-18 spacecraft from the Baikonur Cosmodrome in Kazakhstan.

“I’m really excited,” said Vande Hei, a retired colonel in the U.S. Army who was one of nine candidates selected from a pool of 3,500 applicants in NASA’s 2009 astronaut class.

“I had been training as a backup for a launch last October, and as a contingency, I was training for this mission just in case it was finalized. I’m super-happy that it was and I’m ready to get going.”

On his first mission, Vande Hei and his crew conducted investigations into the manufacturing of fiber optic filaments in microgravity, improving the accuracy of an implantable glucoses biosensor and measuring the Sun’s energy input to Earth.

This time around, a NASA release stated he will “work on hundreds of experiments during his mission to benefit life on Earth and learn more about living in space.”

Among the areas of research will be studies on cotton root systems and Alzheimer’s disease and a technology demonstration of a portable ultrasound device.

The mission could stretch as long as a year, though that depends on other arrivals to the ISS and when modes of returning to earth become available.

But regardless of when his latest mission ends, Vande Hei expects its beginning to be less of an adjustment.

“The first time I was there, I was the only rookie,” he said. “But I’d spent so much time training that I felt like I had a bit of a chip on my shoulder. I was really sensitive to people trying to show me what I should be doing. And I realize now that I shouldn’t have been that way. I should have just appreciated the help.

“This time, it feels more like going back to a job in a lab where I worked a couple of years ago. So I feel like I’ll be a lot more ready to step into things right away.”

Vande Hei has been training in Russia since early January and said he and his crewmates will quarantine during the final two weeks before launch. But even before then, plenty of new training protocols have been implemented as a result of the ongoing global COVID-19 pandemic.

“Some of the things we used to do in person can now be done remotely,” said Vande Hei, who received his first COVID vaccine shot before he left for Russia and expects to receive his second soon.

“We’re always wearing masks, even when we’re training in the Soyuz spacecraft and we’re wearing spacesuits. That’s because the air we’re breathing is exchanged between the suits. So we keep the masks on. It’s not very comfortable. But it’s the right thing to do.”

Astronauts have now been living and working aboard the ISS for over 20 years. According to NASA, a total of 242 people from 19 nations have visited the station, and it has hosted more than 3,000 research investigations from researchers in 108 countries and areas.

Out of 152 Americans who have visited the ISS, Vande Hei will become the 90th to return for a second time or more.

“As time went on the first time, I felt like I got better and better at my job,” he said.

“A lot of things become reflexive, just like picking up a spoon and eating on Earth. You don’t really have to think about that – you just do it. It’s the same thing when you’re adjusting to conditions on the space station. After a while, it becomes part of your routine. But it took some adjustment.

“I remember when I first got up there, I was about to open a big bag of rice. My crewmates were all yelling ‘Wait, wait, wait!’ But I did it too quickly and rice went flying all over.”

Vande Hei was born in Virginia and lived in New Jersey before graduating from Benilde-St. Margaret’s High School in St. Louis Park, Minnesota in 1985. He arrived in Collegeville in the fall of that year and earned a degree in physics from SJU before receiving his Master’s degree from Stanford in applied physics.

He was commissioned in the Army through the ROTC program and served as a combat engineer. Beginning in 1999, he became an assistant professor of physics at the U.S. Military Academy in West Point, New York before his selection as an astronaut a decade later.

But his ties to SJU have remained strong over the years. In May of 2019, he was back on campus to deliver the school’s commencement address and receive an honorary Doctor of Science degree.

During his first trip aboard the space station, he and fellow NASA astronaut Scott Tingle shared their reflections on their mission and answered questions for CSB/SJU and other Central Minnesota middle school and high school students in a live session.

That’s something he hopes to be able to do again this time around.

“Saint John’s obviously means a lot to me,” said Vande Hei, a former track and field athlete for the Johnnies. “I actually brought a Saint John’s track shirt up to the space station with me the first time. I think it’s back at Saint John’s now.

“I heard people on the track team up there, who know how closely they keep track of that gear, were wondering if I stole it,” he added with a chuckle. “But I didn’t. I just requested one to bring along because I wanted to represent Saint John’s when I was up there.” 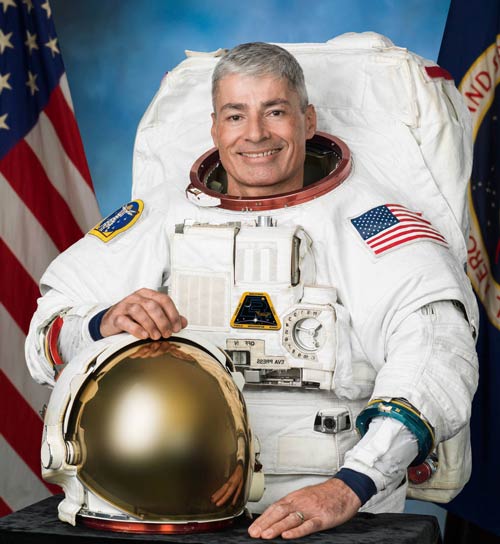