They were just grateful to get a live glimpse inside the International Space Station – the place Vande Hei currently calls home.

See the video of Vande Hei’s conference from the ISS.

“I’ll be staying on @SpaceStation until March 2022 for a 353-day mission, a possibility that I was prepared for from the beginning,” he recently Tweeted. “The opportunity to experience this with wonderful crewmates while contributing to science and future exploration is exciting!”

And, as he did during his first mission, Vande Hei made sure to carve out some time to answer questions from around 100 students at SJU, the College of Saint Benedict and local elementary and high schools.

Whether being in space has changed his perspective on life:

“From up here, the (Earth’s) atmosphere looks just like a varnish on the Earth. It makes you feel very, very, very tiny.”

How his Saint John’s education prepared him for life as an astronaut:

“There’s not a single class I took at Saint John’s that hasn’t helped me out as an astronaut. Even taking an art class. I think having a liberal arts education has really helped me be a lifelong learner and appreciate other people’s perspectives.

“And I think the most important thing you can do as an astronaut up here is work well with other people. That’s one of the great things about not just the classes, but the community at Saint John’s. It really emphasizes living as a member of a community.”

On the coolest thing he can see from the ISS:

“We went through some auroras that were absolutely gorgeous. The solar activity was high enough that the auroras were very active.

“At one point we were looking down from our copula, which is the biggest window on the space station, and it kind of felt a little bit like if you were on a lake in Minnesota and you can see some vegetation kind of barely visible coming up toward you from the bottom. That’s what it looked like but it was this kind of ghostly green and grey lighting instead of plants like you might see on a lake. It was magnificient.”

Vande Hei also shared a harrowing story about accidently shutting down his suit while in the airlock just before he embarked on a spacewalk because he was trying to get a computer mounted to his chest to reboot. That occurred after he had already opened the hatch out into space.

“I started overheating and my visor was fogging up,” he said. “I couldn’t get my fingers to the switches very easily to turn the suit back on. And because of my visor being fogged up, I didn’t know I was actually turning the switch in the wrong direction.”

He said a fellow crewmember finally managed to flip the switch for him.

“And that was at the beginning of a seven-hour spacewalk,” he said. “That was a challenging moment for me.”

Vande Hei then drew laughs from the crowd by executing a mic drop in which the microphone did not, in fact, drop.

He followed that up with the aforementioned triple backflip, ending up somewhere near the ceiling.

“I didn’t stick the landing, though, that’s for sure,” he said after getting a round of applause.

But, on this afternoon, no one minded a bit. 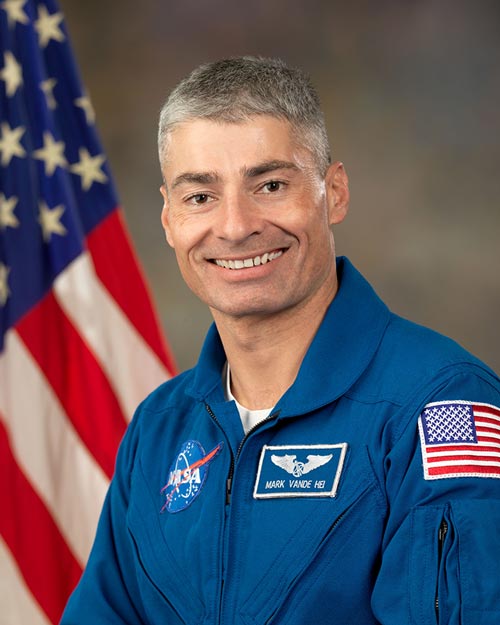