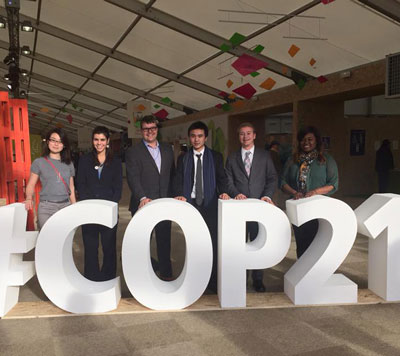 Twelve students from CSB and SJU attended the COP21 Climate Summit in Paris.

This fall, students from the College of Saint Benedict and Saint John's University with varying academic disciplines enrolled in a course called "Climate Studies: Culture, Science and Policy in a Changing Environment," taught by Jessica O'Reilly, assistant professor of anthropology.

But for a dozen of those students, their classroom temporarily moved Nov. 30-Dec. 7 to Paris as they joined high-ranking country delegates, civil society representatives, business leaders and thousands more at the United Nations conference on climate change.

CSB/SJU and two other universities from Minnesota sent representatives to the 21st session of the Conference of the Parties (COP21). Thanks to the work of O'Reilly, Matt Lindstrom, professor of political science, and many others, Saint Ben's and Saint John's were granted non-governmental organization observer status.

This status gave the group access to areas where sanctioned UN discussions and decisions occurred, areas otherwise closed to the general public.

To secure a spot on the CSB/SJU delegation, students participated in a competitive internal application process and were required to demonstrate how they planned to apply this opportunity to their academic and/or professional pursuits.

"Students from this class represent majors in sociology, business, peace studies, political science, physics, environmental studies and many others," O'Reilly said. "A solution doesn't live solely with business leaders and government officials. To effectively address a global and complex issue like climate change, collaboration across disciplines is essential. That's what this class represents."

CSB senior Anna Cron, a political science and Latino/Latin American studies double-major, focused her research on how indigenous populations around the world are adapting to climate change.

"It was inspirational to see so many countries participating in the conference," Cron said. "But personally, I was excited to see how well indigenous people were represented. They are disproportionally affected by climate change, often living carbon neutral lifestyles, but feeling the brunt of climate change most intensely on their livelihoods."

Other students made impressive professional contacts. SJU senior Lucas Giese, a political science major who will study abroad in India in the spring, connected with several Indian organizations participating in the conference. He plans to follow up with them to see what opportunities may develop during his semester abroad.

Giese was also inspired by watching this event unfold firsthand. Instead of reacting to news reports or relying on internet updates, he was able to conduct research and follow the progress of the negotiations.

"It's not often that students in the social sciences can go in the field and watch what's happening," he said.

In addition to the academic and professional interactions, Cron and Giese agree that it was motivating to be around so many people dedicated to addressing climate change.

"Everyone simply acknowledged and agreed that climate change is a real and pressing issue," Giese said. "There was no debate on it, everyone got right to the presenting and sharing of ideas."

As a whole, the CSB/SJU delegation also enjoyed spending time in Paris and taking in some of the local sites. These included visits to the Louvre Museum, exhibits on climate change all over the city and dinner by the Eiffel Tower, lit with green lights in honor of the conference.

This year's conference in Paris ended with a new global climate deal, but O'Reilly and her students emphasize that this does not mean the issue has been resolved.

"It's more important than ever that we continue to push forward," O'Reilly said. "Equity and climate justice are integral to building a low carbon and more resilient future for us all."

O'Reilly said that CSB/SJU plans to participate in COP22 next year in Morocco.