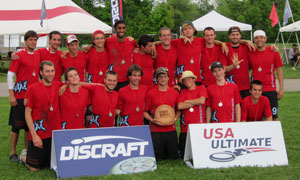 Summer for most CSB/SJU students began on May 13. Finals were over, rooms were cleaned out, and a carefree and relaxed attitude took its well-deserved place in the minds of most. However, for the members of the Saint John's Ultimate Frisbee Club (BAM), there was still plenty of work to be done.

Namely, winning a Division III National Championship in Buffalo, N.Y.. BAM had had a successful regular season, finishing high in a few major tournaments, and had brought that success to their conference and regional tournaments, getting second and first, respectively. With a dynamic senior class complemented by a large group of talented freshman, BAM looked like it had a chance to go deep into the tournament.

While BAM had been to nationals the previous year, they didn't finish up to their own expectations, ending at seventh place out of 16 teams. With the team goal of bettering that result, BAM left in the early morning on Friday, May 20, and drove the 15-some hours to Buffalo (in separate cars, no less). Upon arriving at their hotel in the evening, BAM took a moment to discuss the weekend and then hit the hay at a time that most college students would consider preposterously early.

Thick fog, little wind and mild temperatures covered the fields in the early morning, as BAM started out Saturday with an 8:30 a.m. game against Bentley University, from Boston, Mass. BAM would overcome a slow start and win 13-10. The weather then decided to improve dramatically, as did BAM.  They would finish the day off with wins over Lehigh (15-7) and Wake Forest (11-7). BAM was feeling confident, and after a delicious, tournament-provided dinner of chicken sandwiches and fruit cups went to bed with the hope that the next time they did, they would do so as national champions. 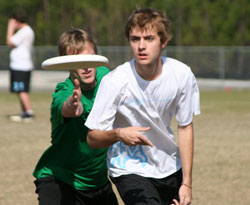 The weather on Sunday morning was cloudy with a few drizzles, but BAM's concerns were not with the weather. Instead, they were with Georgia College & State, the next opponent. BAM jumped out to an early 7-2 lead, and the game seemed to be in hand. But BAM got a little too complacent, and Georgia made a run and made it interesting for the rest of the game. It took all that BAM had to bring the game to double-game point (aka Universe Point, where whoever scores wins), but with a huck from freshman Pat Kunkel followed by a great catch from freshman David Stemper, BAM advanced to the semifinals.

In semi's, BAM met a familiar foe: Grinnell, the team it had beat to win regionals. Despite being ranked 15th out of 16 teams entering the tournament, Grinnell had gone 3-0 on Saturday and had just come off a quarterfinal victory against Truman State. While Grinnell appeared to be playing its best Ultimate of the year, BAM was not about to let what happened against Georgia State happen again. BAM took an early lead and never looked back, winning 14-10 and earning a spot in the national championship game. 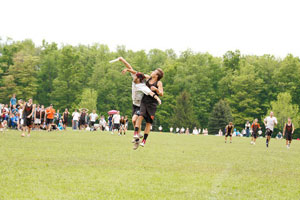 The sidelines were packed, spirits were high and the climax of Saint John's season had finally come. All of those 10:30 p.m. to midnight practices had finally paid off, and now it was all about desire. The opponent, Claremont College, was the No. 1 seed entering the tournament, and BAM was No. 2. Needless to say, this was the matchup that everyone was waiting for. The teams did not disappoint. BAM, as was the pattern for most of the tournament, jumped out to an early 3-0 lead, and then pushed it to 6-3 behind inspired play from freshman Nihal Bhakta. However, as with the Georgia State game, BAM may have gotten a little complacent, and Claremont rattled off four straight points to take the lead. The teams would trade points for most of the rest of the game, and despite BAM's best efforts (and a multitude of ridiculous Pat Kunkel catches), Claremont would win 11-9.

While they did not get the result they wanted, BAM's second place finished capped off the most successful season in program history. While the departing seniors (including, but not limited to Chris Battista, Ben Roske, Matt Theisen and Tyson Gerdes) are irreplaceable, strong freshman and sophomore classes (plus a few juniors) give the impression that the sky is the limit for this team. BAM will be back next fall, rejuvenated and hungry for a national championship.