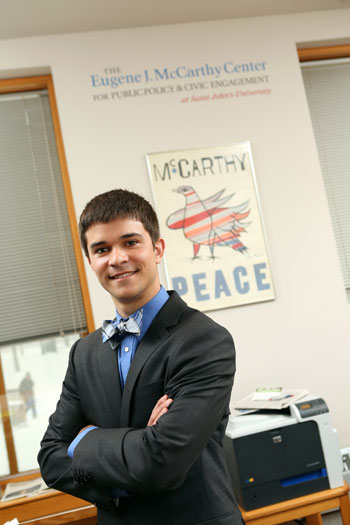 It's a good thing Saint John's University junior Tyler Brown has brushed up on some facts about Harry Truman.

Brown visited the Truman Library April 6 in Independence, Mo. And, on April 11, he received a copy of "Truman," a biography of the U.S. president written by David McCullough, from SJU President Michael Hemesath — a book he had already read.

No, Brown isn't getting ready for a history test on the 33rd president, but he can call himself a Truman Scholar. Brown was one of 59 students from 52 U.S. colleges and universities named a 2014 Truman Scholar. The list of scholars was announced Wednesday, April 16, in Washington, D.C., by former Secretary of State Madeleine Albright, president of the Harry S. Truman Scholarship Foundation.

Brown was chosen from a group of 655 candidates from 293 institutions across the U.S. Truman Scholars were selected by 17 independent selection panels on the basis of their academic success and leadership accomplishments and their likelihood of becoming public service leaders.

It's a symbolic award for Brown, who said Truman is one of his favorite U.S. presidents.

"I don't agree with him on a lot of things, but I think he laid an outstanding framework for American foreign policy in the 20th century," said Brown, a political science major from Sioux City, Iowa. "In particular, I really admire the Marshall Plan and the strategy for (Russian) containment.

"The cool thing about Truman, as McCullough points out in his biography, is he's just such an everyman. It seems almost like a fictional story. His name is True-man, he's from a town called Independence and the way in which he ascended from a small town farmer to the President of the United States really epitomizes the American dream."

Brown is the third SJU student to receive the honor, and the first since 1998, when Brendan Kelly was named a Truman Scholar. The College of Saint Benedict has produced four Truman Scholars, including Rachel Mullin in 2013.

"She (Mullin) made me aware of what the Truman Scholarship was when she received it. She encouraged me to apply and she was a huge help in preparing me for my own interview," Brown said. "Without her, I would have never even applied. I owe her just a ton of credit."

Actually, Brown said it was a "total team effort" that helped him achieve this honor, including faculty members from the political science department - particularly Philip Kronebusch, professor of political science and coordinator of competitive fellowships at CSB and SJU; other students who applied for the Truman Scholarship; and the Eugene J. McCarthy Center for Public Policy and Civic Engagement at SJU, serving CSB and SJU.

Brown has been active at CSB and SJU as a member of the SJU Student Senate, and currently sits as the student trustee on the SJU Board of Trustees. In addition, he is the student coordinator for the McCarthy Center; chaired the College Republicans for a year; spent two years with the CSB and SJU Speech and Debate Club; and spent a year as a tutor at the CSB/SJU Writing Center.

"Tyler Brown is an exceptionally deserving Truman Scholarship winner," Hemesath said. "He's not only an exceptional student, but he has also been deeply engaged in the life of the CSB and SJU community in his role as a student coordinator at the McCarthy Center, demonstrating his deep passion for matters of public policy.

"He has also played a very important role in representing students' interests in his role as the student trustee on the Saint John's University Board of Trustees. I have admired his thoughtful, Benedictine demeanor in both settings. He is an excellent representative of our community and of the liberal arts in general," Hemesath said.

Brown is interested in pursuing a career in education policy, with the goal of improving the quality of a K-12 education in Iowa in low-income areas.

"What really grinds my gears is that there are people out there who lack opportunity," Brown said. "Particularly in low-income areas, I think the education system is very, very poor. There's a huge achievement gap between kids from high income and low income families. That is what drives me.

"I definitely want to focus on implementing broader, systematic reform. There are a lot of great ideas for education reform out there that have been really effective when they've been tried. We just need to make them happen," Brown added. "I want to do some sausage making, as some of my political science profs would call the law-making process."

Before graduate school, however, Brown intends to apply for a Teach for America two-year position. "Before I can contribute to education reform, it is essential for me to gain experience in the classroom," he wrote in his Truman application. "This will allow me to better understand an educator's perspective, thereby rendering me a more informed policymaker."

"He will undoubtedly use this Truman Fellowship to further the common good, just as the creators of this program envisioned," Hemesath said.

There have been 2,965 Truman Scholars since the first awards were made in 1977. The 2014 Truman Scholars will assemble for a leadership development program May 22 at William Jewel College in Liberty, Mo., and they will receive their awards in a special ceremony on May 25 at the Truman Library.