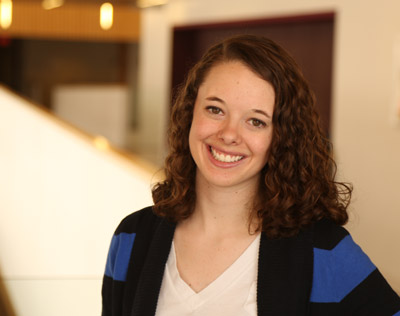 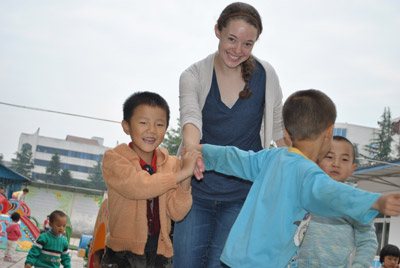 Rachel Mullin is one of 62 students from 54 U.S. colleges and universities to be named a 2013 Truman Scholar.  Mullin is seen here working with young students in China.

On April 10, her dream came true. Mullin, a junior at the College of Saint Benedict, is one of 62 students from 54 U.S. colleges and universities to be named a 2013 Truman Scholar. The list of scholars was announced in Washington, D.C., by former Secretary of State Madeleine Albright, president of the Harry S. Truman Scholarship Foundation.

Mullin was selected from a group of 629 candidates nominated by 293 colleges and universities. Truman Scholars were chosen by 17 independent selection panels on the basis of their academic and leadership accomplishments and their likelihood of becoming public service leaders.

"I had actually heard about the Truman as a junior in high school, when I was applying to different colleges," Mullin said. "It was always on my radar. When I came here as a prospective student to Saint Ben's and Saint John's University, I sat down with Dr. Richard White, who at the time was the director of the honors program, and we kind of talked about how you go about being a Truman Scholar here, and the amazing resources they had available here. "

"The Truman Scholarship is a prestigious honor for Rachel and for the College of Saint Benedict. We are very proud of Rachel, her accomplishments and her aspirations," said CSB President MaryAnn Baenninger.

She is the fourth student from CSB to receive the honor, and the first since 1998, when Amy Hertel received the honor. Saint John's University has produced two Truman Scholars. There have been 2,906 Truman Scholars selected since the first awards were made in 1977.

"It took a lot of work to stay on the beam," Mullin said about staying on course to achieve her dream. "I had great advisers from faculty along the way, getting me courses that I needed to take, and how to stay on track. I also had a phenomenal group of friends who really understood what I wanted to do. They would bring me coffee at night when I was working on my Truman application and help me study for tests. They were very supportive, and I don't think I would be here without their help."

Mullin, a native of Humboldt, S.D., who is a political science and history major, has certainly stepped out on her own.

She studied abroad in China as a sophomore in fall 2011, teaching English in a school in Chongqing as well as volunteering at a school in Beibei. This year, Mullin has worked as a scriptwriter in the Extending the Link student documentary production, "Khulla," which makes its Central Minnesota debut Tuesday, April 16, at Gorecki Center, CSB (she was one of six students who filmed 23 hours of interviews on the topic of mental health in late December and January in Kolkata, India). In her Truman application, she wrote a policy proposal about dealing with hunger in the Sudan. In the summer of 2012, she served as an international affairs legislative intern for South Dakota Sen. Tim Johnson.

"She has been involved in a lot of international issues, and you kind of see a theme there," said Philip Kronebusch, professor of political science and coordinator of competitive fellowships at CSB and SJU who worked with Mullin on her Truman application.  "Her longer range ambition is to work for the U.S. Agency for International Development."

"I feel honored to have the opportunity to work with her as an academic adviser and professor," said Christi Siver, assistant professor of political science at CSB and SJU. "Beyond her academic achievements, her commitments to help others, whether in her home town or in India, demonstrate her humility and devotion to public service."

Why the interest in international affairs?

"My father Michael is a history professor at Augustana College (in Sioux Falls, S.D.), and we traveled a lot when I was young," Mullin said. "We spent time in Europe and Central America. International travel and affairs have always been part of my interest. Moving forward, when I started high school and college, I really enjoyed my government classes and wanted to see how I could pair my international interest with a career in politics. International relations were a perfect start.

"My dad is actually an American historian, so we would always fight at the dinner table about which is better, American history or international history," Mullin recalled.

Baenninger called Mullin to inform her of the award. What was her initial reaction to the news?

"It was definitely jubilation, just excited that something I've been working on for so long paid off," Mullin said. "But there was also kind of feeling of shock. Since I was a junior in high school, I was thinking about being a Truman. Now that I am one, where do I go from here? It's just kind of, 'What's the next big goal I set for myself, and where do I start aiming?' "

Her first goal is to join the Peace Corps (she can defer the Truman Scholarship for up to four years). Mullin then hopes to receive a master of arts degree in international development at the Paul H. Nitze School of Advanced International Studies at Johns Hopkins University, Baltimore.

The 2013 Truman Scholars will assemble May 28 for a leadership development program at William Jewel College in Liberty, Mo., and will receive their awards in a special ceremony June 3 at the Truman Library in Independence, Mo.