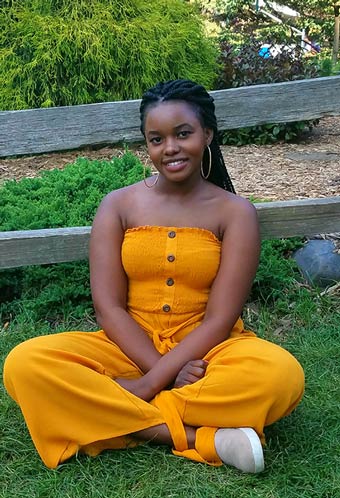 Every story has a moral. Just ask Tracy Magooba.

Magooba, a senior political science major at the College of Saint Benedict, listened to her dreams, worked hard and took advantage of opportunities offered through internships, conferences and study abroad to receive a Thomas R. Pickering Graduate Fellowship from the U.S. Department of State.

“Honestly, the one thing I’ve learned from this process is just give it a shot,” Magooba said. “The worst they can say is no.”

The Thomas R. Pickering Graduate Fellowship, named in honor of one of the most distinguished and capable American diplomats of the latter half of the 20th century, is a State Department program that seeks to attract and prepare young people who have an interest in pursuing a foreign service career in the State Department.

During the two-year program, a Pickering Fellow will enroll in a graduate school. Each fellow will complete two internships, one in the U.S. and one overseas. Throughout the program, the fellow will receive personalized mentoring and professional development opportunities.

Chosen from over 800 applicants, Magooba was one of 30 recipients of fellowships. She will receive up to $37,500 annually for a two-year period for tuition, room, board, books, mandatory fees and a stipend.

Upon successful completion of a two-year master’s degree program and fulfillment of Foreign Service entry requirements, fellows have the opportunity to work as Foreign Service Officers with the State Department in Washington, D.C., or at a U.S. embassy, consulate or diplomatic mission around the globe.

Magooba is the first student at CSB to receive a Pickering Fellowship since 2008, when Stephanie Wegmann Peterson ’10 received a Pickering Undergraduate Fellowship (the undergraduate fellowship has since been discontinued by Pickering). Peterson is a foreign services officer for the State Department.

“My junior year was really transformative,” said Magooba, noting she completed the first of her two internships and studied abroad in France. “I talked to a lot of people, and they said that sometimes you have to follow your dreams. Just give it a shot.”

But to make her dreams a reality, she completed a number of steps that aided her Pickering application (she was also a finalist for the Rangel Graduate Fellowship).

In 2017, she attended the Public Leadership Education Network (PLEN) conference in Washington, D.C., a step that greatly influenced her. The conference centered around women in politics and civic engagement, as well empowering young women to take up those careers.

“I was like, this is it. This is where I want to be,” Magooba said, after visiting the State Department and hearing a panel discussion led by women who worked there.

She followed that up with an internship in the summer of 2018 with the Metropolitan Council in the Twin Cities, part of the Fleischhacker Center for Ethical Leadership in Action Fellowship. She advocated for populations unfamiliar with the application process for Metro Transit bus drivers.

“It really opened my eyes in terms of the process of how what happens at the international level definitely affects (immigrants),” Magooba said.

In the fall of 2018, Magooba took part in a study abroad trip to Cannes, France, calling it a defining moment. “I got to see how other people lived their lives, and also another political situation,” she said.

Finally, in the summer of 2019, she interned with the Hennepin County (Minnesota) Energy and Environment Department as part of the John Brandl Scholars program. There, Magooba worked as an Organics Waste Recycling Intern, dealing with business and commercial interests to make those entities accountable for what they recycle.

“What I really enjoyed about that was that it has a long-term goal of getting rid of landfills, recycling as much waste as possible,” Magooba said.

“Tracy is exceptional,” said Angie Schmidt Whitney, executive director of Experience and Professional Development (XPD) at CSB and SJU. “She is inquisitive, driven and thoughtful.

“Tracy’s selection for the Pickering Fellowship, with her internships, coursework, time in France and exposure to women in leadership in Washington through PLEN, is a culmination of her perseverance and intentionality,” Whitney said.

While Magooba is still exploring her plans for graduate school, she is interested in pursuing a career in international affairs.

“The Pickering Fellowship offers a pretty good track into a career I’m interested in, in the sense of offering professional development and access to an education,” she said. “On top of that, what better opportunity to become a foreign service officer? It’s a role where my passions encompass what I’m interested in, which is international affairs.

“I really want to thank CSB and Saint John’s University in terms of the support it has given me and being able to feel confident to pursue these kinds of things,” Magooba said. “The faculty has helped a lot, and I appreciate it. I knew there was help there when I needed it.”