Thompson's Fulbright ETA to Greece a homecoming of sorts 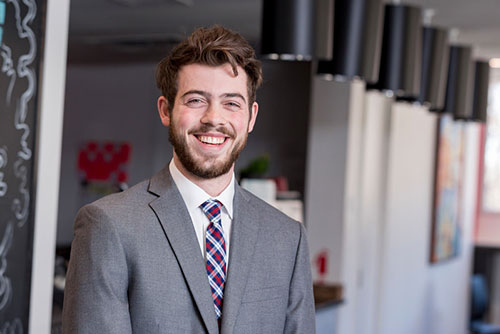 Editor’s Note: This feature story on Michael Thompson ’19 is the third of six feature stories that will appear this summer on the College of Saint Benedict and Saint John’s University website featuring graduates who received awards from the Fulbright U.S. Student Program.

Going to Greece is a bit of a homecoming for Saint John’s University graduate Michael Thompson ’19, who hails from Edina, Minnesota.

“My mom’s side of the family is Greek and understanding our Greek heritage has always been important to my grandpa, whose father immigrated here from Greece by himself at 13 years old,” Thompson said.

So it’s fitting that when he participated in the Greco-Roman study abroad program in 2017, meeting the people was one of the highlights.

“I have been lucky enough to experience Greece through study abroad, and interactions with locals in the farmers markets and coffee shops were some of the highlights of my time in Greece,” Thompson said.

Thompson will now get to travel to Greece for another purpose, working as an English Teaching Assistant in the Eastern Mediterranean country.

Thompson is excited to be able to explore his roots and the wider heritage of Greece.

Greece is home to many ancient landmarks such as the Parthenon and is famous for its status as the birthplace of democracy and the Olympic Games.

In working with his students, Thompson will encourage building connections.

“I hope to demonstrate the value of community within education, and how utilizing each other as resources can enhance your learning of any subject,” Thompson said.

He is also hoping to leverage his future career goal of becoming a physician into the experience. A biology major, Thompson sees opportunities for building skills in his field. Along with his teaching work, Thompson plans to volunteer at a hospice care center in Athens - time permitting.

“My end goal is to become a physician but teaching English will be extremely helpful to my abilities in the medical world.” Thompson said.

“The Fulbright program strives to strengthen intercultural communication, which is important as societies become increasingly global. Additionally, medicine and teaching have a lot of parallels. Both require the ability to connect with others, earn their trust, and work together to achieve positive results in either their learning or health.”

“I hope to be able to effectively communicate with the locals as well as the students, as well as learn to speak a little Greek along the way,” Thompson said.

CSB and SJU students interested in applying for a Fulbright Award for the 2020-2021 academic year should contact Phil Kronebusch, professor of political science and coordinator of competitive fellowships at CSB and SJU, or Lindsey Gutsch, Program Coordinator for Undergraduate Research, Competitive Fellowships and First-Year Experience.