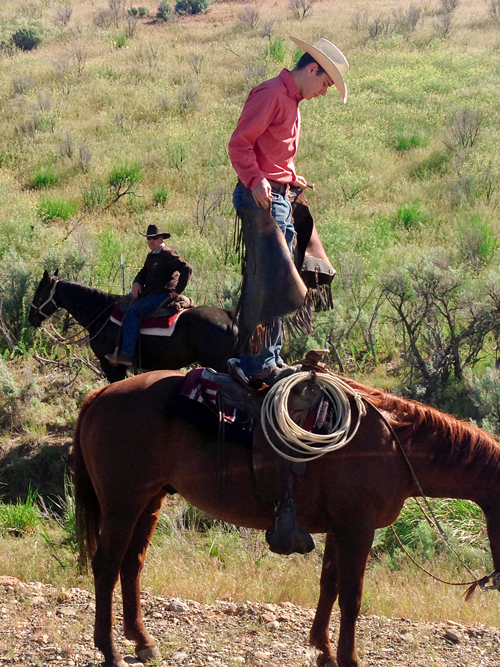 Thomas O’Toole stands on his horse while adjusting his chaps back on his family’s ranch in Harney County, Oregon. The county is bigger than nine U.S. states, and is home to more wild horses than people. 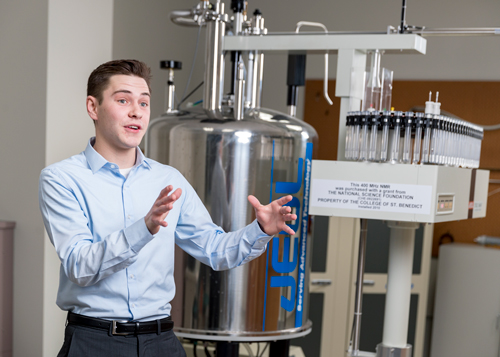 Thomas O’Toole’s four years at Saint John’s University have been noteworthy because of his achievements in science and chemistry, but that’s just the beginning of his remarkable story. 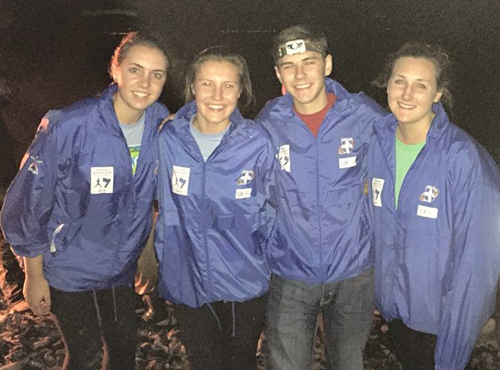 Thomas O’Toole and College of Saint Benedict classmates (from left) Sarah Clark, Amy Larson and Katie Schmitz would end up helping refugees on the beach of the Greek island of Lesbos in November 2015. 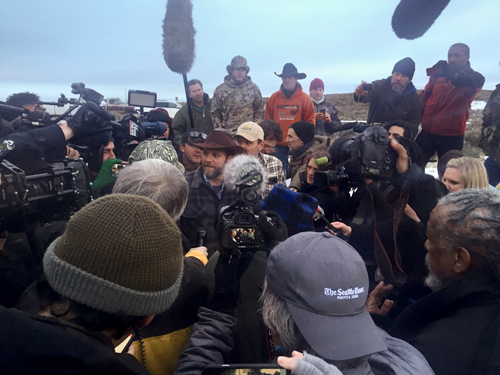 Ammon Bundy (center) is surrounded by media during a standoff with Federal authorities in January 2016. Thomas O’Toole and his father Marc O’Toole subsequently paid a personal visit to the protestors to discuss the situation.

Before he was any of these other things, Thomas O’Toole was a rancher.

“They would still pin me as out of place,” O’Toole said with a grin. “No cowboy hat. These jeans are a little tight. This shirt is not tucked in, and my sleeves are rolled up.

“And my hair has something in it — it’s been done a little bit. Those are marks of a non-native.”

That’s an ironic incongruity, but just the beginning of O’Toole’s story.

There are so many other facets to the Saint John’s University senior’s narrative that it reads like the most wildly implausible Hollywood script.

“All these things sort of roll off that he’s done,” said Cal Mosley, who as CSB/SJU’s vice president of admission and financial aid played a prominent role in getting O’Toole to attend Saint John’s. “He doesn’t wear them on his sleeve.”

That would require very long sleeves:

And there’s more. There’s always more with O’Toole, who to draw a cinematic comparison is basically Forrest Gump with a really high ACT score.

“Curiosity drives him,” said Dr. Kate Graham, chair of CSB/SJU’s chemistry department. “He is soooo driven. He doesn’t sleep — he just wants to do everything.”

“The kid is so capable that you just look and say, ‘Yeah, Saint John’s found a diamond,’ “ Mosley said. “This kid is just special.”

“It’s been an interesting journey — coming here, and doing what I’ve done here,” O’Toole added. “I would never change how I grew up, but I never felt that I fit in perfectly. I always knew that I wanted to do something else.”

His journey began in the unlikeliest of places.

It’s a long way from Harney County, Oregon to Collegeville — and, for that matter, to pretty much anywhere else.

“It’s one of the few counties in America that has more wild horses than it does people,” said Mosley, himself a native of Burns, Ore., in Harney County.

At 10,228 square miles, Harney County is bigger than nine U.S. states: Maryland, Vermont, New Hampshire, Massachusetts, New Jersey, Hawaii, Connecticut, Delaware and Rhode Island. It had 7,422 residents in the 2010 census, about 1 for every 1.4 square miles.

The son of fourth-generation cattle ranchers Polly and Marc O’Toole, Thomas loved the open spaces — and at the same time, knew there was something else out there for him.

“It wasn’t like a lot of my friends — their interests were rodeo, doing cowboy activities, ranching,” said O’Toole, who at age 10 ended up sharing a stage in Medford, Ore., with President George W. and Laura Bush after the First Lady responded to his letter. “They really liked that lifestyle.”

“Not very many people (from Harney County) even go off to college,” said Graham, who had a similar upbringing in Whitehall, Montana. “Most of them stay and work on the farm.”

O’Toole found himself drawn to other interests while attending public boarding school 50 miles from home in Crane — “a tiny, tiny high school where he knew he was the smartest kid in the room, including the faculty,” Mosley said.

Among those interests were football, track and wrestling. O’Toole sustained a wrestling injury during his sophomore year and underwent surgery that very nearly proved fatal.

“It turns out I’m really, really allergic to one of the medications they used,” he said. “I was seizing for a couple hours before they got it stopped, which usually means severe brain damage.

“They had all the family called, saying, ‘This is probably it.’ They had priests called.”

O’Toole awoke from one round of anesthesia reciting the Tridentine Mass and blessing everyone in Latin. He awoke from another speaking exclusively in German.

“It switched back relatively quickly,” he said.

And then this unusual life continued.

Off to parts unknown

O’Toole was looking at prospective colleges online during his senior year of high school when Saint John’s popped onto his radar screen.

“I don’t know if he had any idea what Saint John’s was,” Mosley said.

“Never heard of them before,” said O’Toole, who responded to an invitation to apply online and was immediately accepted and offered a scholarship and a flight for a campus visit.

He was immediately hooked.

“I came here and I absolutely fell in love with it,” said O’Toole, who had been in Minnesota exactly once before (a brief airport layover in Minneapolis). “I couldn’t imagine going anywhere else after I visited.”

“I’d have loved to be a fly on the wall,” Mosley said, “when he told his folks, ‘I want to go to this place in Minnesota that nobody’s ever heard of.’ ”

O’Toole arrived in fall 2013 with a cowboy hat and a few trepidations.

“I had a huge fear of coming and not being successful,” he said. “I knew that I was always at the top of my class in high school, but I didn’t know how that would transfer to a larger place and how I actually would compare to the majority of the population.”

As it turned out, quite favorably.

“He’s a remarkable student,” said CSB/SJU chemistry professor Dr. Nicholas Jones, who oversaw O’Toole’s 2015 summer internship project. “He wanted a place that would meet the needs of his curiosity.”

That curiosity found other outlets in far-flung locations.

O’Toole participated in the Roman-Greco study abroad program in fall 2015, starting in Italy and then moving on to Greece.

On a November evening in Athens, O’Toole and CSB students Sarah Clark, Amy Larson and Katie Schmitz decided their services were needed to help with the crisis on Lesbos, an island in the northern Aegean Sea where refugees were streaming in from Turkey.

They bought airline tickets and left that night.

“We went straight to the beaches,” O’Toole said. “As we pulled up, there was a dinghy full of refugees coming.

“The first day we spent on the beaches — actually lifting people up and helping them, clothing them and getting them any kind of medical assistance they needed.”

“That’s what jumps out at you,” Mosley said. “He’s an extraordinary human being.”

Two months later, O’Toole was back home in Harney County over semester break when Bundy and his supporting militia group occupied a building at nearby Malheur National Wildlife Refuge as part of an ongoing dispute over Federal land management practices.

The Bundy compound was ringed by reporters and TV crews. The O’Tooles walked right in.

“My dad said he wanted to make sure they weren’t destroying the place,” O’Toole said. “It has some family significance.”

What ensued was an amicable conversation and a bit of surreptitious social media posting.

“I sent everybody Snapchat stories,” O’Toole said. “I don’t know if it was secret, but I would take videos of our talk and what was going on inside. I’m sure the press would have loved it.”

Friends were a bit more alarmed.

The joy of chemistry

“There were times in class where he would get so excited when he’d see the applications of the chemistry he would scream,” Graham said.

“We have students like Thomas that come in and you can’t challenge them enough,” said Jones, O’Toole’s co-sponsor for his summer 2015 project on hydride reductions. “They keep pushing themselves.”

“(Graham) has definitely been a force to push me to do my best in chemistry,” said O’Toole, who began the application process for medical school in May 2016 and interviewed at three schools. He was accepted at Oregon Health & Science University Feb. 21, and is awaiting replies from Washington University in St. Louis and Icahn School of Medicine at Mount Sinai in Manhattan.

“I don’t think of it as strange what I’ve done,” said O’Toole, whose tentative plan is to specialize in pediatric orthopedic surgery. “I do what makes me happy.

“If you think you can do something, why not try?”

But first, there’s a loose end to tie up.

O’Toole flew home to Harney County over spring break to help out at the ranch — perhaps for the final time.

“In his mind’s eye, he always knew he wasn’t going to come back to the ranch,” Mosley said. “He loves what he’s done, and he loves the heritage of it.”

“My parents both say they knew that I was never going to stay there,” said O’Toole, who is already a certified emergency medical technician.

Graduation approaches. So does a decision on medical school.

“It’ll be interesting to see where he ends up,” Jones said. “When you think about what he’s capable of doing and the wide array of interests, I doubt that he’s just going to settle in and be the country doctor.”

And then O’Toole is off — to new adventures, new challenges, new vistas, always something new.

“Sometimes,” he admitted. “I think I’m spurred to do that.”

Spurred. For Thomas O’Toole — rancher, Johnnie, chemist, adventurer and so many other things — that’s the perfect word.