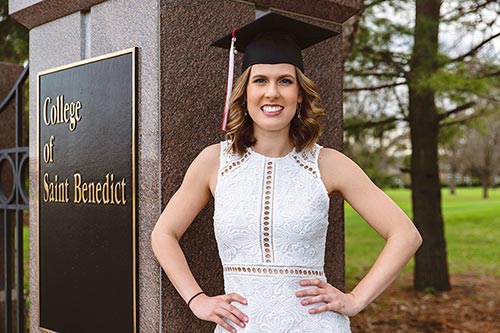 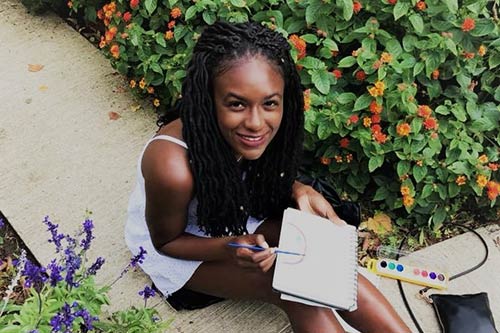 “It was quite the transformative experience,” Conboy said.

How transformative? She was a biochemistry major at Bowdoin College, but after living and teaching in France, Conboy decided to pursue a master’s degree in French at New York University in Paris and a doctorate at Boston College. Today, she teaches French as an assistant professor in the languages and cultures Department at the College of Saint Benedict and Saint John’s University.

No one is guaranteeing that Kyla Porter or Caroline Desert will have a similar experience, but the two recent graduates from CSB are both preparing for their teaching assignments that begin Oct. 1 in France.

Porter, an English major and French minor from Bloomington, Minnesota, will be teaching in Poitiers, France.

Desert, a peace studies major and French minor originally from Haiti and now living in Meridan, Idaho, will be teaching in the Clermont-Ferrand region.

“I can only guess they will have a fabulous year, filled with pleasant surprises and moments to create great memories,” Conboy said.

The Teaching Assistant Program in France offers people the opportunity to work in France for seven months, teaching English to French students of all ages. Each year, over 1,500 American citizens and permanent residents teach in public schools across all regions of metropolitan France and in French Guiana, Guadeloupe, Martinique and Réunion.

In the last two academic years, six students from CSB or SJU have taken part in TAPIF.

In many ways, it’s very similar to the Fulbright Awards program, Porter said.

“I think it has a very similar goal to the Fulbright in that it wants to facilitate cultural exchange,” Porter said. “I’m sure my students will learn about my culture, but my main goal is to learn about theirs. I imagine I will be humbled by everything I do not know, rather than what I teach. I am excited to use the perspective I gain in my future endeavors.”

“Last summer, I did an internship at the Mahatma Gandhi Foundation in the Dominican Republic. While I was working in this organization, I was an English teacher for poor Haitian students,” Desert said. “Since then, I have realized that I want to be a role model who transforms the mind of young people. I also want to inspire and encourage my students.”

Both graduates studied abroad. Desert took part in the program in Cannes, France, during fall semester 2017.

“A year in France will give me the opportunity to be immersed while I teach, which will enable me to develop fluency and the ability to speak in one of my native languages,” Desert said. “In addition to gaining fluency, I believe that teaching in Clermont-Ferrand will deepen my understanding of the culture, the people and their history.”

Porter got a taste of living abroad during the fall semester of her junior year at CSB, participating in the Greco-Roman study abroad program.

“I felt like that was a taste of cultural exchange, but I think to fully immerse myself in it, I need to be someplace longer,” Porter said. “I already feel pretty independent, but I feel like this will take it to a whole new level, being able to live and work by myself in a different country.”

The program caps a busy college career for Porter, who participated on the Bennies’ cross country and track teams, and played violin for the CSB/SJU Orchestra. Little wonder that she sees TAPIF as a nice gap-year option.

“I really wanted to have a gap year after college to decide what my step is going to be, whether it be graduate school or a job,” Porter said. “I just felt like I hadn’t really had time to explore all the options out there yet.

“I really wanted something where I could travel and work but also have lots of time to explore those options,” she added. “I think TAPIF will be an invaluable opportunity to grow in my understanding of Francophone culture and hopefully become fluent in French, if possible.”

Desert hopes to follow her year in France by studying either Africana studies or anthropology in graduate school. But first, she is ready to talk about America to her French students.

“I will talk about the diversity that is America,” Desert said. “Nearly every part of the world has influenced American culture.

“I would demonstrate this by talking about the languages – almost every language in the world is spoken in the U.S. – religions, fashion, food and arts that are represented in America. I would also mention that although America is diverse, it doesn’t mean it is always inclusive.”

“It’s a great program for anyone interested in spending some time in France, exploring teaching, the culture and the language of the country and of its different regions,” Conboy said. “It’s especially great for exploring areas that aren’t necessarily the first cities that you think of when you think of France.”

CSB and SJU students interested in applying for the Teaching Assistant Program in France for the 2020-21 academic year should contact Ana Conboy, assistant professor in the languages and cultures department at the College of Saint Benedict and Saint John’s University.