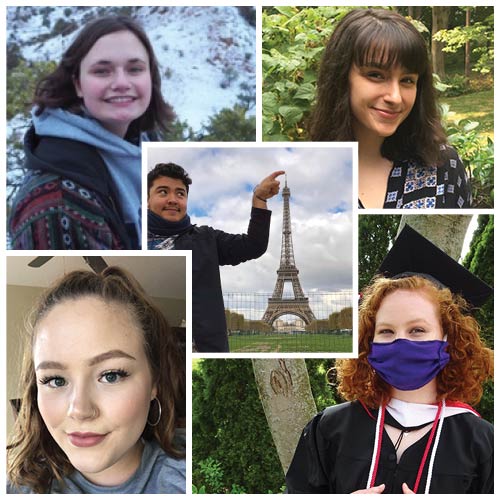 Five 2020 graduates of the College of Saint Benedict and Saint John’s University have received awards from the Teaching Assistant Program in France. They are (starting in upper left, going clockwise) Quinn Hynes-Marquette, Sophia Modeas, Artie Pomerenke, Sidney Christopherson and (in center) Omar Mora.

Five 2020 graduates of the College of Saint Benedict and Saint John’s University will be saying “bonjour” to students in France come October.

TAPIF offers people the opportunity to work in France for seven months, teaching English to French students of all ages. Each year, over 1,500 American citizens and permanent residents teach in public schools across all regions of metropolitan France and in French Guiana, Guadeloupe, Martinique and Réunion.

In the last three academic years and including this cohort, 11 graduates from CSB or SJU have taken part in TAPIF.

As did the other four, Christopherson studied abroad in Cannes, France during her junior year at CSB, “and ever since then, I’ve been dying to go back.”

“Participating in the TAPIF program was something I’d been dreaming of since my sophomore year at Saint Ben’s, when I heard about the program from my study abroad director Dr. Ana Conboy (assistant professor of French at CSB and SJU),” said Christopherson, who will teach in the Académie de Lyon (one of 30 administrative circumscriptions established by the National Education Department).

“I hope to help French students I work with gain a stronger understanding of the English language and build their confidence in speaking it,” said Christopherson, a native of Savage, Minnesota who is    majoring in French (she is wrapping up a couple of classes this summer).

“I’m really glad I have this opportunity because it bridges the gap between college and finding a job somewhere,” she said. “It will really give me a chance to figure out what I want to do next in my life. I also adore the French culture and language, so being able to fully immerse myself in it will be really fun and exciting for me.”

Hynes-Marquette, from Le Sueur, Minnesota who received a degree in communication, also developed a love for France and international travel through her study abroad trip to Cannes.

“I got a taste of the world and I wanted more, so I worked to achieve that goal,” she said. “I hope to bring genuine knowledge and understanding of the English language (to her students). I also hope to bring laughs, love, happiness and valuable life lessons.

Hynes-Marquette will be teaching in the Nancy-Metz region of France.

“Everything excites me about the opportunity – being away from home, pushing myself to live outside the U.S., further developing my French language skills, developing an understanding of the world outside of the United States, discovering parts of myself and making new friends,” Hynes-Marquette said.

“As soon as I learned about the TAPIF program, being a participant in it became a dream of mine,” she said. “Little did I know that this desire to teach abroad in this program would only grow stronger in college, as did my love for the French language and for Francophone cultures.”

Modeas, who will be teaching in the Académie de Grenoble, said she hopes “to instill in (her) students an appreciation for language learning and encourage them to believe in themselves. I also look forward to learning from them.

“I am excited to strengthen my French-speaking and teaching abilities, engage in cross-cultural and intergenerational interactions and mindfully explore France and other European countries,” said Modeas, who received a degree in French at CSB.

Mora, from Bellevue, Nebraska (now living in Omaha) hopes to bring a different perspective to his students.

“It’s not every day that French students get taught by a first-generation Mexican-American,” said Mora, who will be teaching elementary school-aged children in the Académie de Versailles on the outskirts of Paris. “I want to be able to share and exchange the beauty of cultures and what makes each one unique and how cultures can intermingle. I want to be able to represent my family, culture and country in the best way possible.”

Mora, who received degrees in economics and French, believes he is meant to go places – literally.

“I applied to TAPIF because I believe that the great things I am bound to do in my lifetime are certainly not limited only to what I know,” Mora said. “I wholeheartedly believe I am meant to travel the world and use my skillsets to make a difference not only at home, but at the global level.

“Applying and being accepted to TAPIF is the first step of my professional career. I have always been fascinated with the French culture, language and languages in general. I am currently trilingual and beginning to learn my fourth language, Portuguese.” Mora said.

Pomerenke, who received degrees in English and French, will teach in the Académie de Reims.

“I applied for the TAPIF program because I think that it’s an incredible opportunity to learn about my future career in teaching,” Pomerenke said. “I decided very late in my college career that I wanted to teach at the high school level in the future, so it seemed like a logical next step.

“On one level, I hope to bring a new energy to their classroom through being a helping hand and offering the knowledge that I have,” Pomerenke said.

“On another level, I hope to be an example of an intelligent and professional non-binary person,” they said. “I don’t have any non-binary role models who work in everyday jobs - most non-binary public figures are actors, comedians or singers - so I hope that I can show that non-binary people exist in many different spaces. I think that is something that I also want to prove to myself.

“I’m excited to dip my feet into working in a classroom for the first time and learn about my future career,” Pomerenke said. “I really like working face-to-face with other people, so I’m excited to meet the students. I’m also pretty stoked to embark on this adventure and to go back to France.”

CSB and SJU students interested in applying for the Teaching Assistant Program in France for the 2021-22 academic year should contact Ana Conboy, assistant professor of French in the Languages and Cultures Department at the College of Saint Benedict and Saint John’s University.