Editor’s note: This is the fifth in a series of articles that will appear this summer on the seven CSB and SJU graduates who earned Fulbright English Teaching Awards for the 2016-17 school year. 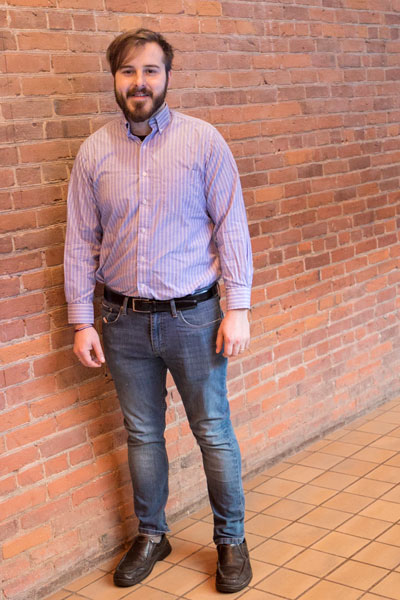 Robin Swingley graduated with a degree in political science at Saint John's University in December 2015. His senior thesis was an examination of aging societies and the societal and economic impacts of aging populations. One factor he considered was the effect that higher levels of immigration have on aging societies.

Now, with his upcoming Fulbright Teaching Assistant (ETA) scholarship to Germany — one of the countries he studied — he will observe this phenomenon first hand.

With his expertise in the subject of modern politics and his familiarity with the language, the St. Joseph, Minnesota, native is well equipped to simultaneously continue his investigation of his thesis and to do his duty as a Fulbright scholar, teaching English in his own classroom.

"I did a gap year before college and went to Austria for 10 months and I have recently been considering a career in teaching. So with all that's happening in Germany and my knowledge of the language, the German program made sense," Swingley said.

He grew up in an area not unlike Germany that is also welcoming a large refugee community. German Chancellor Angela Merkel has vowed to allow asylum for 800,000 refugees from all over the globe.

"Germany is a lot like St. Cloud in that way, and I know of many organizations in St. Cloud that work to build a better community. One that has inspired me is Hands Across the World, where recent immigrants learn English and basic home economic as well as computer skills," Swingley said.

In fact, the morphing demographics of the German population drove Swingley to choose that country.

"Fulbright offers an opportunity in Germany to work in a school with lot of diversity, and I opted into that. I don't necessarily know if I got placed in one of those schools, but that chance drew me to Germany," Swingley said.

He credits small class sizes at SJU and the College of Saint Benedict in preparing him for his upcoming expedition, saying that the more intimate environment conduced students to be "more engaged in the learning process," which in many cases meant teaching and learning from other students through discussion.

For a recent graduate moving thousands of miles from home into the midst of a whirlwind of political change and passion, epitomized by actions such as Brexit, one must feel a bit apprehensive. Swingley understands his situation, however, and has the experience of his past travels to console himself. Additionally, Swingley will be accompanied by his wife, Shelby Weisen, a 2016 graduate of CSB, to help in the transition abroad.

"I am very excited and nervous. But last time [before Austria], I was in the same position. I was super nervous and couldn't imagine how it would be. But when I left [Austria], I realized it had been the best experience of my life, which I think will happen again this time around," Swingley said.

CSB and SJU students interested in applying for a Fulbright Award for the 2017-18 academic year should contact Phil Kronebusch, professor of political science and coordinator of competitive fellowships at CSB and SJU, or Jeff Anderson, associate professor of peace studies.