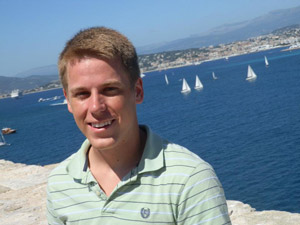 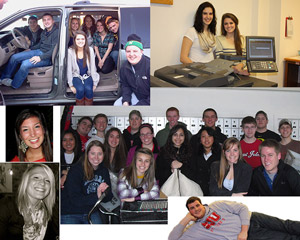 The winners were announced at a reception Friday, April 19, at Room 264, Quadrangle Building, SJU. The awards are held annually, normally during National Student Employee Appreciation Week April 7-13 (the event was originally postponed by a snow storm April 11). The winners received an engraved plaque.

Laudenbach, a junior accounting major from St. Cloud, Minn., has worked since January 2011 in the CSB athletic department. She currently serves as a budget assistant/summer camp lead, which was originally two separate positions filled by two full-time student employees. Due to a late employment change in spring 2012, she was asked to fill both roles. As summer camp lead, she ensured that registration data was accurate, details for each camp were confirmed with CSB Events and Conferences and that the necessary office support was given to the camp directors. She created spreadsheets as a budget assistant that helps others understand the athletic office budget, maintaining data on where the budget was at for the fiscal year and assisting coaches with their budget questions.

"Hannah is a student that you'd choose first to represent your department," said Deanne Hollermann, CSB athletics department coordinator and Laudenbach's supervisor in her nominating form. "Her maturity level is much higher than many at her age. She maintains a professional working relationship with the athletics staff and staff at CSB and SJU, especially with Events and Conferences, the CSB business office and Information Technology Services. She also works with parents and campers in a professional manner."

Bikus, a senior French and mathematics double-major from Andover, Kan., is currently the student manager of the SJU Duplicating Center (he has worked in the area for 3½ years). He assists in the daily operations of the center and is responsible for training other student employees, monitoring and ordering supplies, monthly inventories and cash deposits and the balancing of daily job slips.

"Josh is one of the rare students that come along once every 10 to 15 years," said Mary Gouge, Bikus' supervisor. "He gives 100 percent and does his best at everything he is given. I have never known him to cut corners, and he often is too hard on himself when he feels he has not reached the high standards he sets. He has been by far one of the top students I have had working for me. He is simply a first-class, grade-A person."

The other students nominated for the SJU Student Employee of the Year award (listed alphabetically) and the areas they work in were Collin Hager (Financial Aid/Student Employment) and Andrew Yost (SJU Events).

Managers are responsible for all day-to-day operations and services, training staff, monitoring supplies, inventories, cash deposits, billing entries and helping out wherever needed. The main duty of office assistants is to provide customer service in a friendly and helpful manner. They must maintain confidentiality and perform assigned duties with a high level of accuracy and attention to detail.

Campus Mail and Duplicating Center coordinator Mary Gouge and assistant Kathy Scegura wrote in the team's nominating letter that the students' greatest strength "is their camaraderie. They truly look for each other and are ready to help each other in any way they can. Whether it's finding a solution to a random problem, helping one another move 80 cases of paper up to the fourth floor duplicating center, carrying in 200-plus packages or taking hundreds of sacks of bulk mail to the Post Office, they quickly extend a helping hand to one another. They rely on each other to complete their jobs in a fast-paced, ever-changing environment."