Home / Newsroom / Artwork on the prairie

Artwork on the prairie 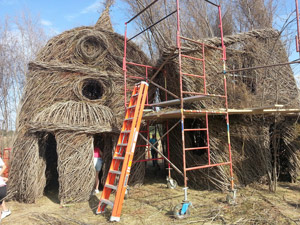 "It was a bit too far for me," Dougherty recalled. "I just said, 'That's what I really like about it.' I like it in the distance, so I could just dream about what it was like."

The chapel serves as the inspiration for his outdoor sculpture constructed with saplings (mostly willow) harvested from Saint John's Abbey Arboretum. The sculpture is currently under construction alongside Stearns County Road 159 - the main entry road to SJU from I-94.

For Dougherty, the selection of the chapel as a basis for his art was "a starting point."

"It was just the way (the chapel) caught my attention sitting across the way (on Lake Sagatagan)," Dougherty said. "It looked small, from across the way. It looked diminutive and exciting, and the thought that you could see something mysterious.

"We could have made some kind of larger building here, but I thought it would be nice if it was a group of smaller things that seemed to cascade together," Dougherty said.

The sculpture consists of five small chapels built in a cluster, with a courtyard in the middle. People will be able to walk through the buildings, and find a surprise "when you go in," Dougherty said. All five are leaning into each other.

"We wanted things to look a little off-kilter," Dougherty said. "We didn't want them to look pristine, because nature is not quite pristine. They are a little bit geometric, but at the same time, they're at the whimsy of the wind. So, they've kind of fallen together.

"What I love in particular about the sculpture he's building here is how full of surprises it is," said Br. David Paul Lange, OSB, associate professor of art at the College of Saint Benedict and Saint John's University and one of the coordinators of the project. "With all its barrel vaults and rose windows and vestibules, it's a total play on Romanesque architecture, only nothing is exactly where it's supposed to be. None of the buildings is perfectly straight or perpendicular or squared up, and everything is askew or leaning or tumbling over.

"It's incredibly playful. The moment you enter through one of the doorways, you're transported into this wondrous place that takes you back to your childhood. It's like the ultimate tree house," Lange said.

Rachel Melis, associate professor of art at the College of Saint Benedict and Saint John's University and a project coordinator, saw Dougherty's art on display at Grinnell College and Kansas State University and was "amazed." She, other members of the art department and the student art club brainstormed about possible artists to bring to CSB and SJU before selecting Dougherty.

"Patrick struck us as a perfect follow-up to the Year of Sustainability (at CSB and SJU)," Melis said. "His work harmonizes with CSB and SJU's emphasis on sustainability - especially with our arboretums, our own making of maple syrup, fine wood work, wood-fired pottery, handmade books and prairie-grass paper."

Dougherty has created over 230 such sculptures around the world.

"I see the utility of sticks now, much like kids see them," Dougherty said. "Sticks tend to capture the imagination. They tend to speak of simple shelter. There's something about the haphazardness of them that becomes endearing."

Still, Dougherty knows he has to make his artwork appeal to the public.

"It needs to be so powerful that people want to stop and look at it. Otherwise, it's kind of an irrelevant object," Dougherty said. "I make wildly different things, and this is the first time I've made these little chapelettes and had these buildings kind of lean on each other like this. I'm really happy about that, to see what it's like."

Individual students and classes from CSB and SJU and Saint John's Preparatory School, as well as the general public, have assisted Dougherty in building the sculpture (about 25 volunteers a day have helped). "You would never guess how much back-breaking work it has taken to make them," Lange said.

Dougherty expects the sculpture to last about two years.

"I love how magical it is," Melis said. "It evokes all of my favorite children's books and childhood dreams of fantastic tree houses or being able to live like a bird. Having participated in the making of one now, I am equally impressed with how Patrick's personality plays out in the process. He's hard-working, patient and kind."

Stickwork structure at Saint John's to remain for another summer (March 2, 2015)

See a list of the project's co-sponsors and other information.