Home / Newsroom / The making of a statue

The making of a statue

Saint Benedict statue, sculpted by a CSB/SJU art professor, is installed in the Stephen B. Humphrey Auditorium Plaza 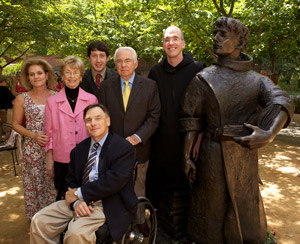 In many ways, the statue of Saint Benedict installed at SJU June 18 is a product of Benedictine community.

Gene and Mary Frey initiated the project in 2006, commissioning a statue in honor of their son, Jim Frey '78, in recognition of his service as chair of the SJU Board of Regents.

Abbot John Klassen asked Br. David Paul Lange, CSB/SJU associate professor of art, if he would sculpt the statue. Lange promptly agreed, and there the idea stalled for the next several years while Lange stewed about the details.

How, exactly, would he go about it, he pondered.

"How can I imagine him?"

It's a privilege to be asked, Lange said. "What sculptor would not leap at the chance? The only answer is yes, and you work out the details later."

Despite the delay, Lange said the project was on his mind from the beginning. He began by sketching ideas, and he examined print images of Saint Benedict through history.

The images usually depict him as the patriarch of western monasticism, at the apex of his monastic life, Lange said.

Lange chose to depict Benedict at the beginning of his monastic life, when he was still struggling to sort things out. Lange fashioned the figure as if pausing in the middle of an action, in a slight turning gesture.

"That's what conversion is," he explained, "a turning."

The statue is being installed on the Stephen B. Humphrey Auditorium Plaza. The installation was designed so that Benedict's face aligns with the bell banner of Saint John's Abbey and University Church. Lange wanted to convey the sense the Saint Benedict is engaged in listening to the call to prayer.

Saint Benedict often is portrayed with symbols such as a crosier, a ring, or a pectoral cross, but Lange chose books, a quill and a raven. He wanted none of the trappings of authority, he said.

"I wanted a simple man embarking on his life."

If designing the statue was a laborious creative process, the actual sculpting was quite another. As Lange refined his artistic vision, SJU master potter Richard Bresnahan gave the project momentum in the spring of 2011, when he offered the assistance of the Saint John's Pottery Studio.

With that, the pace quickened. Studio manager Ryan Kutter and senior apprentice Steven Lemke assumed administrative duties and handled logistics. The studio provided the clay - approximately 3,000 pounds of Saint John's earth - from its holdings, and the studio team pugged it (processed it to remove air and water). Bresnahan provided invaluable advice about the clay's properties.

The studio team built a damp room - a wooden frame covered with plastic - to keep the artwork from drying. Lemke coordinated with a mold-maker in Georgia and a bronze foundry in New York.

As the sculpting got underway, Lange invited Lemke to work with him. Since they both had full-time jobs in addition to the sculpting, they used Photoshop software to communicate.

Lange would photograph the artwork, imagine how he wanted it to look and use Photoshop to indicate changes he wanted.

Time management was a constant issue, Lemke said. They needed to finish the work before winter. The drier air would affect the delicate work on the hands and arms, he explained. They would shrink as they dried, causing the proportions to change.

The intense work schedule had one benefit, Lemke said. It forced them to solve technical problems and make creative decisions intuitively. As he worked on the monk's habit, Lemke experienced a moment of insight - eureka!

One advantage of the pottery studio clay, aside from its Benedictine sense of place, is that it responds better to textural nuances, he said. There were, however, challenges with structural integrity, from the sheer weight of the clay.

In his work as a ceramic artist, Lemke uses coiled clay on large pots, to provide structure. That technique worked perfectly on the habit, he said.

As the deadline neared - the mold-makers were scheduled to arrive Dec. 5, 2011 - Lange and Lemke worked feverishly to complete the figure. Lange worried that there may not be enough time to do the raven.

"And then I thought, Steven should have something that is entirely his own work," Lange said.

When he was an SJU art student, Lemke had taken every class possible with Lange. The opportunity to collaborate with his mentor was a grand opportunity, and, he said, Lange was especially generous with his offer for Lemke to do his own work.

The transformation from clay form to a bronze statue is meticulous and highly specialized.

Working with clay on a full figure has become a lost art. Lemke said the mold-maker told them he had never worked with a full figure composed of local clay. Artists usually prefer an oil-based synthetic clay, because it doesn't shrink.

The mold-maker used over a dozen gallons of a rubber mixture to encase the clay. That stopped the clay from drying and captured the sculpture's textural details. Next, a layer of reinforced plaster was applied to create a mother mold, from which a wax copy was made.

The bronze technician, Benjamin Jose, is a former visiting artist at the Saint John's Pottery through the Jerome Foundation. He coated the wax figure, creating yet another mold, melted the wax and poured the bronze into the mold. A patina application completed the process.

Reflecting on what the experience has meant to him, Lemke listed the collaborative relationships and institutional connections that came together at the right moment to accomplish the project: the donors, monks, alumni, pottery studio team, the CSB/SJU art department, SJU institutional advancement, the Jerome Foundation, and Gary Jorgensen, who prepared the installation site.

The statue represents the community of Saint John's on many levels, he said. This could never have happened anywhere else.

Watch a video of the installation and blessing of the new statue.