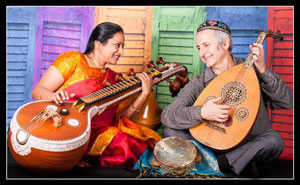 "Song of Wonder," a concert of South Indian and Judeo-Spanish music, will be performed at 6:30 p.m. Thursday, May 1, at Sacred Heart Chapel, Saint Benedict's Monastery, St. Joseph.

Inspired by the poetry of a thousand years in their traditions, vocalists and string musicians Nirmala Rajasekar and David Jordan Harris designed the concert to probe the many facets of wonder as gateways to an illumined and impassioned life. They will be joined by percussionists Thanjavur Muruga Boopathi and Mick LaBriola, 'ud (also spelled oud, a stringed musical instrument) player David Burk, and vocalist Shruthi Rajasekar.

Highlights of the concert will include excerpts from the oldest extant piece of notated Jewish music; improvisational performances by Rajasekar on the veena in both familiar and rare ragas (melodic soundscapes of Indian music); ancient Tamil Sangam poetry; plaintive Judeo-Spanish and Hebrew chants from Jewish communities in Bosnia, Morocco and Turkey; and new musical arrangements flowing from the concert's cross-cultural collaboration.

The concert, which is free and open to the public, is sponsored by the Jay Phillips Center for Interfaith Learning in collaboration with the Sisters of the Order of Saint Benedict, St. Joseph.

Rajasekar is the artistic director of the Naadha Rasa Center of Music in Plymouth, Minn., where she teaches the art of South India's Carnatic music. She made her debut as a solo performer on the 7-stringed veena at age 13 in Bangalore, India, and has performed with musicians from many backgrounds, including Western classical, Chinese and jazz. Radio India has pronounced her a "Grade A" artist for All India Radio since 1990 and she has been featured in many world-renowned venues, including New York's Carnegie Hall, the United Nations' Symphony Space, the Music Academy in Chennai, India, and the Rumi International Festival in Konya, Turkey.

Harris is co-founder and artistic director of the Twin Cities-based Voices of Sepharad. He has studied and performed Sephardic (Judeo-Spanish) music in many countries throughout North America. A singer, actor and dancer, he has been a guest artist with Ensemble Espaῆol, Guthrie Theater, Illusion Theater, In the Heart of the Beast Puppet and Mask Theatre, Liz Lerman Dance Exchange, Lyra Baroque Orchestra, Minnesota Opera, North Star Opera, Rose Ensemble, Walker Art Center and Zorongo Flamenco. He is the interfaith arts special consultant for the Jay Phillips Center and the executive director of Rimon: The Minnesota Jewish Arts Council.