Land that previously used the sun's energy to grow corn will be providing a different kind of energy soon. 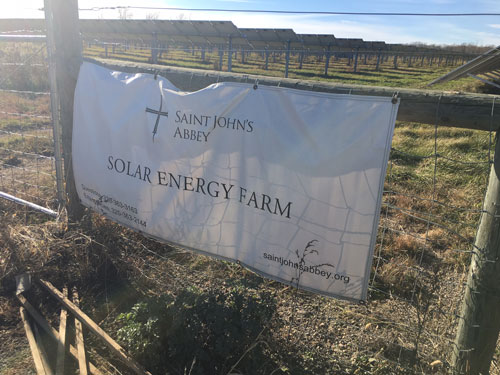 A new and improved photovoltaic solar field is coming to Saint John's Abbey and University, which will convert solar radiation into electrical energy.

The new solar field is located on the northwest side of campus on Abbey-owned land. It covers 23 acres, and is almost six times bigger than the initial two solar farms (a combined four acres), which opened in 2009 and 2014, respectively, and are adjacent to the new field.

The three fields combined will provide almost 19 percent of Saint John's annual electric power needs. In the summer months, when there are fewer people on campus and electrical usage goes down, it will provide just over 88 percent of peak electrical needs.

"Saint John's is unique because they have the land to do this," said Rich Lillis, general foreman of the project who works for Hunt Electric Corporation, the general contractor for the new field. "A lot of schools are land-locked and can't do something like this."

Each solar field uses different types of solar modules. The first unit utilized a module tracking system that followed the sun across the sky. But the second and the new units have a fixed racking system set at 35 degrees facing south.

"The new addition will be extremely unique, due to the fact that the Saint John's facility will have three large scale facilities that utilize three distinct technologies," said Nathan Franzen, vice president for development at Geronimo Energy, the Minneapolis-based company which is the developer for the addition. "I am not aware of another site like it in our region."

Br. Benedict Leuthner, OSB, treasurer of Saint John's Abbey, said that while the tracking system is slightly more efficient than the fixed panels, 'the feedback now is that the extra cost for the mechanism for the turning and the motors and the controls and so on is not worth it. Basically, you put a fixed panel in, leave it be and it's good to go." 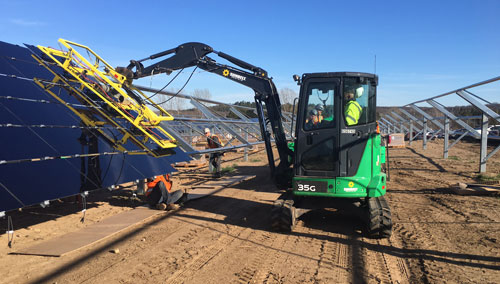 The new field is part of the statewide Community Solar Gardens initiative. The new field is rated at three megawatts and will produce over 5,100,000 kilowatt-hours of electricity each year, enough to power 525 homes.

All of the power generated initially goes to a sub-station in nearby Avon. Under the terms of the Community Solar Gardens program, Saint John's can use a maximum 40 percent of the power produced. The remaining 60 percent goes into the Xcel Energy power grid for other customers.

"Saint John's started doing solar in 2009 because the Benedictines really try to be sustainable in their own right," Kroll said. "Until 1956, we grew our own food here. We had our own electric energy plant already in 1899 - fired by renewable wood. So, we've always been interested here - the monks and the school - in being self-sufficient, and part of being self-sufficient is that you're also conservation-minded.

"When we built it in 2009, the four-acre field was the biggest solar farm in Minnesota, but now it's pretty small compared to all the solar farms in Minnesota. But as an educational institution, we are pleased to have helped pave the way for people — county commissioners, city officials and interested citizens — to see what a commercial solar farm looked like and understand the value and benefits of photovoltaic energy," Kroll said.

"For my own personal point of view, I'm very excited about the different generations of sustainability," Leuthner said. "This is a meaningful step in the whole kind of entry to conservation and sustainability. We've made steps in the last five years with items that people don't see - in the power house, in the tunnels and so on. We've put in better controls and better meters. We've made some significant changes. We're trying to put our money into things that matter from the energy point of view."

Franzen said it is interesting to compare costs of the different phases.

"Phase I in 2009 had an installed cost of over $7/watt," said Franzen, who has worked on all three phases of the Saint John's energy farm for two different companies. "Phase II and III will be well under $2/watt. And, what makes the Saint John's story so impressive is that the data from the Phase I facilities was used to prove the viability of the technology at the Minnesota Public Utilities Commission.

"This led to the construction of the 100 megawatt Aurora Solar project (located at 21 sites including Saint John's in 16 Minnesota counties) and really opened the industry's — and investors — eyes to the fact that solar is a statistically reliable on-peak generator that can compete and compliment natural gas," Franzen said.

There will also be an educational component to the new solar farm as well.

"Saint John's University and College of Saint Benedict will have physics students, environmental studies students and other departments interested in sustainable resources looking at the solar farm," Kroll said. "They can actually be connected to a project like this, to all the outputs that are live. You can go to the internet site here and read the outputs. The physics student can ask, 'How do the tracking panels compare to the fixed panels? How do the new panels compare to the old ones?' "

Kroll said the land the solar farm sits on will be replanted to a prairie-wildflower mix between the panels. What's known as a wild orchard — which includes apple trees and native berry bushes — will be planted to the north side of the solar farm to help "reduce the scale" of the project, Leuthner said. The plantings will also increase pollinator habitats for bees, butterflies and birds.