Saint John’s University President Br. Dietrich Reinhart, OSB, announced today that the SJU basketball team will play on a refinished and redesigned court floor named in honor of its head coach and his wife, Jim and Adrienne Smith. The floor in Sexton Arena will be known as the Jim and Adrienne Smith Court.

“We have been blessed to have Jim and Adrienne as part of the Saint John’s community for over 44 years, and I am delighted to know that the basketball court in Sexton Arena will bear their names,” Reinhart said. “Over the years, Jim has been a record-setting coach but even more importantly he has demonstrated his character, commitment, dedication and genuine humility at every turn. And, of course, Adrienne has been with him every step of the way. It is fitting that this beautiful court is named in honor of this most distinguished couple.” 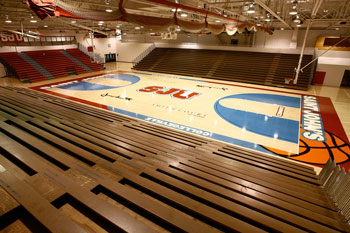 The Johnnies will formally dedicate the court when SJU plays host to St. Cloud State in its first regular-season game at 7:30 p.m. Saturday, Nov. 22.

“Having a basketball court named in our honor in Sexton Arena is just a fantastic thing,” Jim Smith said. “I’m honored and humbled and everything else in regards to it. It is a wonderful thing.”

Smith enters his 45th season as head coach of the Johnnies this winter 15 wins shy of 700 for his career, all at SJU. The winningest collegiate basketball coach on any level in Minnesota, Smith ended the 2007-08 season with a 685-475 career record (.591).

The renovation of Smith Court was made possible by the generous support of a group of former Johnnie basketball players, including Bill Sexton ’55, Joe Mucha ’66, Michael Dady ’71, Tom Grudnowski ’72, Pat McKenzie ’79, Tim Kosiek ‘80 and John Wiehoff ’84.

''I didn't play for Jim Smith (I played basketball at Saint John's before his time), but I have greatly admired him and his coaching philosophy,” Sexton said. “It's not just about winning, though his teams have certainly had their share of victories. Rather it's about team work, sportsmanship, character and other life lessons. In recognition of everything that he and his wife Adrienne have done for Saint John's and for hundreds of young student athletes, my family thought it would be fitting to dedicate the basketball court in Sexton Arena to their honor. We are thrilled that other Johnnie basketball players have joined us in paying this special tribute to Jim and Adrienne.''

“The Jim and Adrienne Smith Court is a particularly fitting recognition of this wonderful couple,” Dady said. “I am particularly pleased that Saint John’s has recognized the key role that Adrienne Smith has played in Saint John’s basketball – both by supporting and inspiring Jim Smith to achieve things he wouldn’t have been able to achieve without Adrienne, and by being such a good and supportive friend to so many of Coach Smith’s players over the years, including me.”

“For me, Coach Smith and Saint John’s basketball are literally one and the same,” Wiehoff added. “I honestly don’t even know the name of the coach before him. He has had such a positive and lasting impact on building the program that it seems logical to me that doing something permanent, like naming the court, is the only appropriate way to recognize his career.”

Smith has led his teams to seven MIAC titles, five MIAC playoff titles, nine trips to the NAIA tournament and eight trips to the NCAA Division III playoffs, including appearances in the 2000, 2001 and 2007 NCAA tournaments. Smith has won MIAC titles in each of the past five decades. Since 1964, SJU has enjoyed 30 winning seasons under Smith's direction.

A three-time NAIA District Coach-of-the-Year, Smith is a past president of the National Association of Basketball Coaches. In 1992-93 and 2000-01, Smith was named the NCAA Division III West Region Coach-of-the-Year.  Smith also was named MIAC coach of the year in 2000-01, which is the sixth time in his career he has received that prestigious honor.