Sharon Daloz Parks, director of Leadership for the New Commons at the Whidbey Institute, will deliver the Saint John’s University commencement address at 2 p.m. Sunday, May 10, in the Saint John's Abbey Church, Collegeville, Minn.

Parks will receive an honorary Doctor of Laws degree.

Also during the commencement ceremony , Saint John’s Abbey and University will present its Pax Christi Award to the Rev. John P. Foley, SJ, executive chairman of the Cristo Rey Network.

Joe Kane, a political science major from Golden Valley, Minn., will be the student commencement speaker, as selected by the Saint John’s senior class. 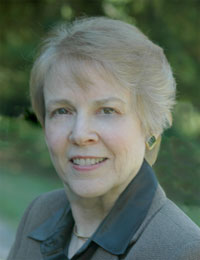 Parks is an author and teacher on issues related to the formation of leadership and ethics in a changing world.  Her doctorate is from Harvard University, where she subsequently served for more than 16 years in faculty and research positions in the schools of Divinity, Business and the Kennedy School of Government (Center for Public Leadership).  She has served as associate director at the Whidbey Institute, where she now directs the initiative “Leadership for the New Commons” and leads a seasonal leadership retreat cycle,  Powers of Leadership.  She also teaches in the Executive Leadership Program and in the Pastoral Leadership Program at Seattle University.

Her most recent books are Leadership Can Be Taught: A Bold Approach for a Complex World and Big Questions, Worthy Dreams: Mentoring Young Adults in Their Search for Meaning, Purpose, and Faith. She is co-author of Common Fire: Leading Lives of Commitment in a Complex World. 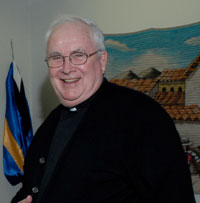 A Chicago native, Foley entered the Society of Jesus in 1954. He earned a bachelor’s in Latin from Xavier University in Cincinnati and holds a master’s in sociology and M.Ed. from Loyola University in Chicago. From 1961 to 1995, he served the Jesuit missions in Peru, working primarily in education. He served as president of two of Peru's Jesuit K-12 schools.

Foley returned to Chicago in 1995 to collaborate in establishing Cristo Rey Jesuit High School. He was named president of the school in 1996 and served for eight years. During his tenure, he oversaw the effort to establish the school, hiring of all personnel, student recruitment and the construction of 150,000 square feet of classroom and recreation space. Foley raised more than $26 million during this eight-year term and left Cristo Rey Jesuit High School with a $2 million endowment. More importantly, he established the tradition and spirit of a school that has become a national model. In January 2005, he assumed the presidency of the Cristo Rey Network and is responsible for managing its day-to-day programs and activities.

As the highest honor awarded by Saint John’s, the Pax Christi Award recognizes those who have devoted themselves to God by working in the tradition of Benedictine monasticism to serve others and to build a heritage of faith in the world. The award has been presented to 56 individuals. Past recipients include the late Cardinal Leo Jozef Suenens of Belgium; Archbishop Jean Jadot , the former representative of the Holy See in the United States; Eugene McCarthy, the late former senator and presidential candidate; the late Archbishop John Roach of the Archdiocese of Saint Paul and Minneapolis; Mary Jo Copeland, founder and director of Minneapolis’ Sharing and Caring Hands; Amy Grant, a contemporary Christian singer; and the late Cardinal Joseph Bernardin of the Chicago Archdiocese.