Denis McDonough to give address during SJU commencement ceremonies 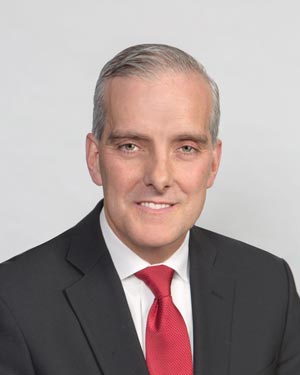 McDonough will receive an honorary Doctor of Laws degree.

Steven Bezdichek Pfahning, a graduating physics major from Northfield, Minnesota, will be the student commencement speaker, as selected by the Saint John's senior class.

McDonough is currently a senior principal at the Markle Foundation, a visiting senior fellow at Carnegie’s Technology and International Affairs Program and an executive fellow in the Global Policy Initiative at the University of Notre Dame.

McDonough, a native of Stillwater, Minnesota, came to SJU in the fall of 1988. He played safety for Hall of Fame football coach John Gagliardi, and helped the Johnnies win MIAC championships in 1989 and 1991.

After earning a master’s degree from Georgetown University’s Edmund A. Walsh School of Foreign Service in 1996, he worked as an aide for the House Foreign Relations Committee, where he focused on Latin America. He then served as a senior foreign policy adviser to South Dakota Sen. and Senate Minority Leader Tom Daschle, until Daschle lost his re-election bid in 2004.

McDonough also served as legislative director for former Colorado Sen. Ken Salazar, after his election in 2004. He later became a senior fellow at the Center for American Progress.

On Oct. 20, 2010, Obama announced that McDonough would become Deputy National Security Adviser. It was in this position that McDonough was part of one of the most iconic photos of the Obama Administration — when Obama’s security team watched from the White House Situation Room on May 2, 2011, as U.S. Navy SEALs conducted an operation to capture and kill Osama bin Laden.