Saint John’s Abbey and University have announced the conclusion of the largest, most ambitious capital campaign in their history. Forward Ever Forward: The Campaign for Saint John’s, which launched in 2013, exceeded its goal of $160 million by raising $188 million to support the future of Saint John’s.

“The generosity displayed by so many people advances Saint John’s pioneering spirit and our mission of renewing the fabric of community, a mission that is even more vital today than when we launched the campaign four years ago,” said Abbot John Klassen, OSB, leader of Saint John’s Abbey, one of the world’s largest Benedictine monasteries.

“The initiatives made possible through the support of our generous donors builds upon Saint John’s tradition of educational excellence for an even greater future,” said Michael Hemesath, president of Saint John’s University. “This Catholic, Benedictine, liberal arts education – rooted in community – prepares students for a lifetime of learning, character development, service and leadership that are greatly needed in today’s world.”

Saint John’s is characterized by a long tradition of faith, innovation and excellence that began in 1856 with the establishment of a Benedictine monastery and the founding of Saint John’s University in 1857.

Major initiatives funded by Forward Ever Forward: The Campaign for Saint John’s include:

School of Theology and Seminary 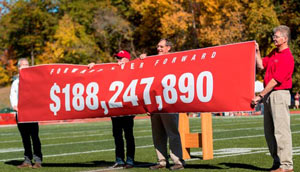