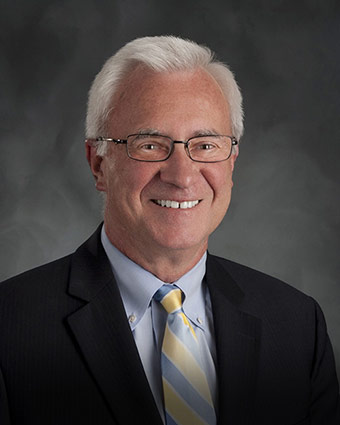 Dr. Eugene McAllister has been named interim president of Saint John’s University by the university’s Board of Trustees.

The announcement was made today to the campus community by Dan McKeown ’85, chair of the Board of Trustees.

“We’re delighted to have Dr. McAllister join us for the coming year as interim president,” McKeown said. “He appreciates and respects the Benedictine, Catholic tradition. He is also deeply committed to the value of a liberal arts education.”

McAllister follows Michael Hemesath ’81, president emeritus of Saint John’s University, who announced May 21 he was stepping down Aug. 1 after seven years as president.

“I’m thrilled to be joining the Saint John’s University community,” said McAllister, who served as president of the University of Great Falls (Montana) from 2003-16. “I knew of Saint John’s extraordinary success educating students to succeed in life.”

McAllister earned his doctorate in economics from the Catholic University of America in Washington, D.C. He began his career in higher education as Jacksonville University’s Vice President for Financial Affairs (1997-2001) before becoming president at the University of Great Falls, where he led the school’s transformation from a local university serving mostly non-traditional students to a residential, liberal arts university.

“He brings a diverse resume of experience that can help us think about the future for Saint John’s. He’s got a demonstrated track record of growing enrollment,” McKeown said.

“My visit (to Saint John’s) just confirmed the strong sense of community and caring and dedication to the university,” said McAllister, who will serve as interim president through the fiscal year ending June 30, 2020. “I think Saint John’s is a gem in American Catholic higher education, and I would love to help more people realize that and see that.”

The Board of Trustees will continue to lead the search for a permanent replacement as the 14th president of SJU.