Vic Moore, the president of the Saint John’s J-Club, admits his organization has some catching up to do when it comes to the school’s newly-established Hall of Honor.

But given athletics at SJU date back to at least the late 19th century, that still leaves almost a century-and-a-half of worth Johnnies’ sports excellence on which to draw from.

Which made narrowing down the list of this year’s first full class of honorees a challenging task.

“We’re still at the beginning,” Moore said. “We’ve got around 150 years to take into consideration here.

“I think it’s fair to say that just about everyone who was nominated this year is going to be in the Hall at some point.”

In the end, though, the voters (made up of the J-Club Board of Directors) settled on a class of 13 inductees - 12 individuals and one team.

The group will take their places in a ceremony scheduled for Oct. 5 in Guild Hall as part of Homecoming festivities.

And it is still possible to be there in person. More information on attending the induction ceremony can be found online.

“It’s really going to be a special evening,” Moore said. 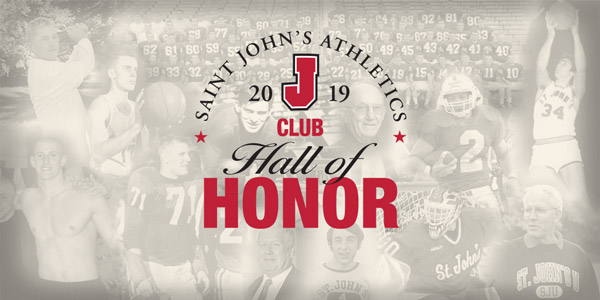 The list of inductees reads like a who’s who when it comes to the history of Saint John’s athletics: