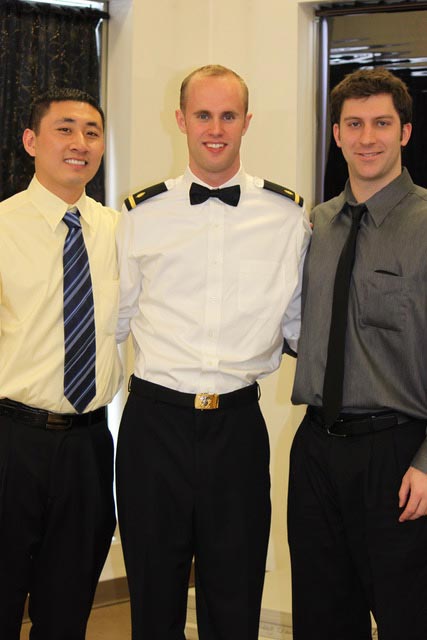 Canh Tran, Garrison Pease and Tom Kaster share a bond and friendship formed during their time at Saint John’s University, where they were members of the Class of 2009.

Now the three share another connection: They’re among the many medical professionals working on the frontline of the ongoing COVID-19 pandemic in New York.

The state, and especially New York City, has become an epicenter in the spread of the virus in the U.S. with the most cases and deaths reported. That has placed a severe strain on the area’s health care system.

But through it all, those like Tran, Pease and Kaster continue to fulfill their duties, putting in long hours in spite of the risk to their own health.

“My heart breaks for all health care personnel who have to isolate themselves from their families to reduce risks, and for those who got sick from taking care of others,” Tran wrote via email.

“Nonetheless, I (have never been) more proud to be a doctor and have felt tremendous and  continual support from my friends and family throughout the country during this time.”

Tran is a travel internal medicine physician who resides in Manhattan, but travels outside New York City for two weeks each month. His job is to alleviate physician shortages in underserved hospitals until permanent physicians can be found to allow them to function safely.

It’s a role that has become more vital than ever as cases of COVID-19 have grown steadily. Tran has been rotating among several different hospitals in the state in both primary care and inpatient settings.

“My daily routine at work has changed significantly over the past few weeks,” he wrote. “Our primary care clinic transitioned to mostly telemedicine for less severe illness evaluation. Whereas patients who seem to be in more distress are met in the parking lot for quick triage, then (are) either sent home or to the emergency room for further treatment and evaluation. More and more calls come in each day as concern for being infected with the coronavirus rises.”

Pease is a pathologist at a major hospital in the Bronx. In large hospital systems like the one in which he works, pathologists serve in either an anatomic or clinical capacity.

Anatomic pathologists support surgical and oncologic subspecialties, diagnosing, grading and staging cancers and working for patients dealing with anything from a thyroid or prostate biopsy to a lung or kidney resection, he said.

Clinical pathologists support all medical and surgical subspecialties from the clinic to the emergency room and inpatient intensive care units, serving patients having samples drawn for a wide variety of conditions – a list that now includes COVID-19.

“Clinical pathology needs more pathologists and support personnel to direct the increased volume and the increased number of sites,” he wrote via email. “While I am a pathologist who usually makes diagnoses on surgical specimens such as prostate biopsies and kidney resections, I will soon be reassigned to help direct a clinical pathology lab at one of the sites that transitioned from an outpatient center into an inpatient center.”

Kaster is a perioperative (OR) nurse in the Navy who is currently stationed in Portsmouth, Virginia. He has been deployed to New York City aboard the USNS Comfort, a hospital ship that has now taken anchor in New York Harbor in an effort to relieve pressure on the city’s overburdened medical facilities.

His deployment meant leaving behind a wife and two young children, but he said his family has been supportive as he fulfills his duty. It marks the third deployment for Kaster, who has been on active duty in the Navy for 10 years.

Tran said the toughest part of his experience so far has been seeing loved ones separated from patients because of restrictions that have been put in place to prevent the spread of the virus.

“Witnessing the pain that family members experience when told they cannot be with their loved ones is probably one of the hardest parts of my job,” he wrote. “Something I hope to never have to experience again in my professional career once the world we knew returns to normal.”

All three said they are grateful for the support they have received, but were quick to point out there are so many helping keep things going during this difficult time.

“We are all serving and fulfilling our duty to the patients,” Pease wrote. “It is certainly what we signed up for – our calling – and we love our jobs! It is important to note also that the hospitals are dependent on the entire contingent of staff: phlebotomists, medical technicians, nurse assistants, radiology and ultrasound technicians, custodians and facilities management personnel, secretaries managing the phones, security guards, food service employees and, of course, the administrators (the “suits”).

“Outside of health care, the (people) keeping the city functioning, including grocery stores and restaurants open (for takeout), law enforcement personnel, public transportation employees, elected officials, and the teachers and professors being asked to quickly change their curriculum from in-person to completely virtual definitely deserve their due credit.”

As they go about their work at this difficult time, all three said they remain joined by the bond they formed together at Saint John’s, and Pease said they are carrying the Benedictine values instilled there forward.

Values strengthened through their interactions with classmates and professors, as well as the culture they found in Collegeville.