Leahy will receive an honorary Doctor of Laws degree.

Also during the commencement ceremony, Saint John's Abbey and University will present its Pax Christi Award to John Paul Lederach, professor of international peacebuilding at the University of Notre Dame.

Matthew Beck, an English and German double major from Buckman, Minn., will be the student commencement speaker, as selected by the Saint John's senior class.

Leahy graduated from St. Benedict's Prep in 1963. He earned a bachelor's degree in philosophy from Seton Hall University in 1968 and master's in divinity with distinction in 1975 from the Woodstock College at Union Theological Seminary. In 1966, he took his first vows as a monk of the Benedictine Abbey of Newark and was ordained to the priesthood in 1972.

Leahy began his work at St. Benedict's Prep in 1967, teaching biology and religion and assisting with the wrestling and football teams. Following the suspension of operations of St. Benedict's in 1972, Leahy became the 23rd headmaster and was named to direct the efforts of monks, interested parents, alumni and friends to re-open the school as soon as was feasible. Under his direction, St. Benedict's re-opened in 1973 with 89 students and 14 faculty members.

St. Benedict's has now grown to 580 young men in grades seven through 12, most from African-heritage and Hispanic backgrounds, and 67 faculty members. Ninety-five percent of the school's graduates go on to college. In 1988, the school added a $9 million academic-athletic center, followed by a $10 million campaign for a new library and endowment funds for scholarships and teacher support. A field house and a 60-student residence, named Leahy House, were added in 2000. St. Benedict's has recently completed a $50 million campaign to renovate its oldest buildings and increase endowments for scholarships and teacher support.

Leahy is president of the board of the Essex County Vocational and Technical Schools, and serves on the Board of St. Vincent College. In 2006-07, he was a Gustav Heningburg Civic Fellow with the Institute on Ethnicity, Culture and the Modern Experience at Rutgers-Newark. Leahy is also a member of the Newark Alliance. 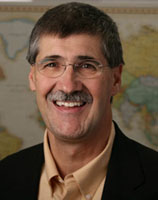 Widely known for his pioneering work on conflict transformation, Lederach is involved in conciliation work in Colombia, the Philippines, Nepal and Tajikistan, plus countries in East and West Africa. He has helped design and conduct training programs in 25 countries across five continents.

Lederach holds a doctorate in sociology from the University of Colorado.

As the highest honor awarded by Saint John's, the Pax Christi Award recognizes those who have devoted themselves to God by working in the tradition of Benedictine monasticism to serve others and to build a heritage of faith in the world. The award has been presented to 58 individuals. Past recipients include the late Cardinal Leo Jozef Suenens of Belgium; Archbishop Jean Jadot , the former representative of the Holy See in the United States; Eugene McCarthy, the late former senator and presidential candidate; the late Archbishop John Roach of the Archdiocese of Saint Paul and Minneapolis; Mary Jo Copeland, founder and director of Minneapolis' Sharing and Caring Hands; Amy Grant, a contemporary Christian singer; and the late Cardinal Joseph Bernardin of the Chicago Archdiocese.