Some spring break plans may be changing for fans of the Saint John’s University basketball team.

The Johnnies (23-4 overall) will host the University of Northwestern (21-6) of St. Paul in the opening round of the NCAA Division III national basketball tournament at 7:30 p.m. Friday, March 1 at Sexton Arena. Friday is the final day of classes at SJU before a week-long break.

Both teams enter the game on long winning streaks. Northwestern has won 15 games in a row and the Johnnies have won eight consecutive contests.

The other game at Saint John’s matches the University of Wisconsin-Oshkosh (23-3 overall) against Lake Forest College of Illinois (18-9) at 5:30 p.m. UW-Oshkosh, the regular season WIAC champion, placed second in the 2018 Division III national tournament.

The winners of the two games play at 7 p.m. Saturday, March 2, with the victorious team advancing to the round of 16 in the 64-team bracket.

The playoff title is the sixth for the Johnnies, who will make their second consecutive national tournament appearance and 19th overall. 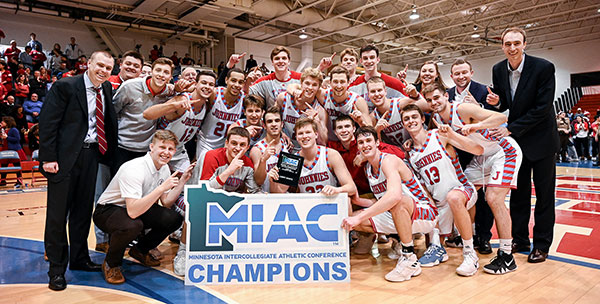