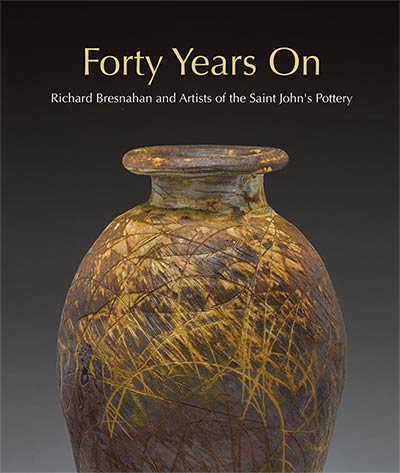 The Saint John’s Pottery celebrates its 40th anniversary this spring and will be featured in an exhibition at Westminster Presbyterian Church in Minneapolis, an accompanying book highlighting artists and essays from four decades of work and participation in the National Council on Education in the Ceramic Arts (NCECA) annual conference to be held March 27-29 at the Minneapolis Convention Center.

In 1979, Richard Bresnahan returned from nearly four years of apprenticeship with the Nakazato family in Karatsu, Japan. Bresnahan – a 1976 graduate of SJU – established the Saint John’s Pottery with a foundational focus on environmental stewardship, an awareness of and continued relationship with global cultures, wood-fired kiln innovation and local clay and glaze materials.

Those defining elements were inspired and made welcome at Saint John’s by the Benedictine monastic community’s 1,500-year legacy of developing culture and art as part of a meaningful life.

The exhibition Forty Years On: Richard Bresnahan and Artists of the Saint John’s Pottery will be on display from March 24-May 12 at Westminster Presbyterian Church, Minneapolis. In conjunction with the exhibition, which is free and open to the public, an accompanying catalogue will feature work from 10 artists, and essays and poems by writers who have been connected with the Saint John’s Pottery over several decades.

The Saint John’s Pottery has also organized a panel discussion sponsored by NCECA’s annual conference to take place at 4:30 p.m. Friday, March 29, in Auditorium-Room 1 of the Minneapolis Convention Center. The discussion will be moderated by Samuel Johnson, professor of art at the College of Saint Benedict and SJU who served as an apprentice under Bresnahan. The panelists include Bresnahan; Matthew Welch, deputy director and chief curator of the Minneapolis Institute of Art; Raghavan Iyer, cookbook author, writer, culinary educator and consultant; and Br. Paul-Vincent Niebauer, OSB, of Saint John’s Abbey. The panel discussion requires conference registration and fee.

Following the discussion, an NCECA Exhibit Reception will be held from 6-8 p.m. at Westminster Presbyterian Church. The reception is free and open to the public, and artists will be available to speak with visitors.

The selection of the artists for the two-month exhibition at Westminster Presbyterian Church is representative of the wide range of creative approaches that have been taken at the Saint John’s Pottery, as well as the close personal relationships that have developed into a distinct artistic community.

The exhibition includes work from close friends Bresnahan and the recently passed Mitsuo Kakutani, as well as pieces by Koie Ryoji, Debra Keyes and Johnson. Many of these dialogues are based on teacher/student relationships, between professors and undergraduates or through the more intensive model of master and apprentice. These relationships and the artistic momentum they have cultivated represent a major contribution to the ceramic culture in Minnesota, and to sustainable approaches to ceramics more broadly.