Dr. Siyabulela Mandela, the great-grandson of Nelson Mandela, will be at the College of Saint Benedict and Saint John’s University from March 20 to April 20 through a residency sponsored by The Eugene J. McCarthy Center for Public Policy and Civic Engagement and the Multicultural Center at CSB and SJU.

Mandela – or Madiba as he likes to be called – is a humanitarian, scholar and youth activist. He is currently a regional project manager for east and southern Africa at Journalists for Human Rights (JHR). Mandela holds an M.Phil. in Conflict Transformation and Management and a Ph.D. in International Relations and Conflict Resolution from the Department of Politics and History at Nelson Mandela University in South Africa. Mandela has deep connections to social justice movements across the world like his great-grandfather, the late former president of South Africa and Nobel Peace Prize winner.

Mandela will give a keynote address titled "Global Activism, Youth, and Social Movements" at 6 p.m. Thursday, April 7, in Gorecki 204 at CSB.

“Throughout my development as a scholar-practitioner, peace and human rights activist, I have lived by these two convictions,” Mandela said. “First, Horace Mann in 1848 succinctly stated that ‘Education, beyond all other devices of human origin is the greatest equalizer of the conditions of Men,’ and second, Nelson Mandela set forth the purpose of education as ‘the most powerful weapon which you can use to change the world.’ I have set myself in a journey to change the world and that begins by first being the change I want to see.

“I think the youth particularly in institutions of higher learning are in a unique position to be the drivers of that change. As this generation, we are who we have been waiting for, it’s the youth that can champion the issues of social injustice, systematic racism and inequality on a global scale and that is possible only if they collectively come together in pursuit of that much-needed change,” Mandela added.

During his stay, he will teach a one-credit course – COLG 105Q-GLOBAL ACTIVISM – from March 24 to April 14 on Thursday evenings. The course introduces students to youth-led social movements in Africa and beyond, drawing lessons from the 1976 student protests and the 2015-17 Fees Must Fall protests in South Africa, the Arab Spring in North Africa and Black Lives Matter in the United States. While discussing conflict theories and conflict resolution approaches, the course focuses on the unique roles of young people in creating social change.

The McCarthy Residency showcases the work and skills of someone who has a distinguished career in public service, policy or politics through a week-long on-campus residency. Through visits to classes, cafeterias, practices and public programs, the McCarthy resident engages a wide spectrum of the CSB/SJU community in addition to the general public. The primary purpose of the residency is to give students extended access to someone with real knowledge and wisdom about policy, civic engagement, and public life. 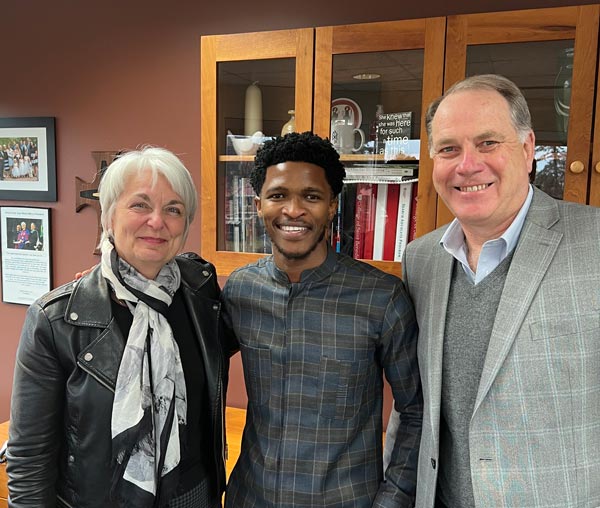