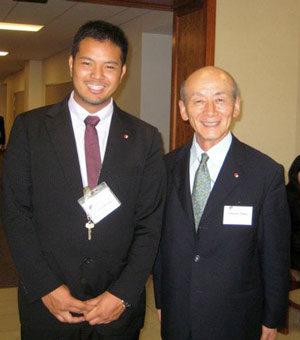 Kunihiro Shimoji and an alumnus from the 5th Japan-America Student Conference have a photo taken together.

The distance between the United States and Japan spans half the globe. Saint John's University sophomore Kunihiro Shimoji wants to bridge that distance, by way of Okinawa.

Kuni's goal is to become an expert on U.S.-Japan relations as they relate to Okinawa.

He is well on his way.

Last year, Kuni was one of 70 students - 35 from each country - selected in 2010 for the 62nd Japan-America Student Conference (JASC), the oldest student-run cultural exchange between the U.S. and Japan, dating back to 1934, and he was among eight students selected after only one year of university study.

Each summer, nearly 80 students from universities across Japan and the United States convene to discuss some of the hottest topics facing the two nations. The program alternates host countries each year, giving students the rare opportunity to see places, whether at home or abroad, and learn about their culture through the eyes of others. Former U.S. Secretary of State Henry Kissinger and former Japanese Prime Minister Kiichi Miyazawa are among alumni of the program.

"We did some field trips, visited Teach for America, some local entrepreneurs and the Consul General," Kuni said. "When we were in [Washington] D.C., we had a security forum and exchanged our views on international relations between Japan and the United States, and also other parts of the world. We invited some professors and visited the [U.S.] Capitol, Department of State and talked with the person in charge of the Japan-America Security Alliance."

At the conference, Kuni quickly set himself apart as a leader. He was elected to the executive board of 16 students, which is in charge of organizing next summer's conference scheduled for July 24-Aug. 21, 2011, in the Japanese cities of Niigata, Kyoto and Tokyo and the prefecture of Okinawa. Kuni is the Okinawa site coordinator, with responsibility for virtually all of the planning and logistics for that portion of the conference.

Kuni will also lead a roundtable at the conference on strengthening the ties between nations through comprehensive security. He wants to further the discussion on how the Japan-America Security Alliance should work, not only from the military perspective, but also from non-traditional angles, including environmental security issues.

As a first-year student at SJU, Kuni's potential for leadership drew attention. Yuko Shibata, assistant professor of modern and classical languages, and Rachel Sherman Johnson, coordinator of Asian studies, advised Kuni to apply for the 2010 JASC conference. Sarah Pruett, English as a Second Language coordinator, and Dave Bennetts, professor of history, supported Kuni with letters, since the JASC application process was rigorous and competitive.

In Sarah's letter, she commented on Kuni's skill as a debater. "Kunihiro has a valuable ability which many students his age lack: he can vigorously discuss and debate issues, including controversial issues, and he can challenge and disagree with his classmates in a way that does not hurt or offend. For this reason, he is a great catalyst for lively class discussions."

Dave commented in his recommendation on Kuni's leadership. "He is very respected by his peers - American and international students alike. He is already a campus leader and participant in a variety of campus lives."

Kuni is currently a resident assistant in St. Mary Hall and a member of Asia Club, International Affairs Club and Model UN. He also helps the CSB/SJU International Admissions Committee by corresponding with Japanese applicants. Kuni would like to attend graduate school at Georgetown University for international relations after he has completed his undergraduate work at SJU.

"I foresee him going into diplomacy or some kind of international relations at a high level - and the contacts he is making through JASC make that even more likely," Sarah said.