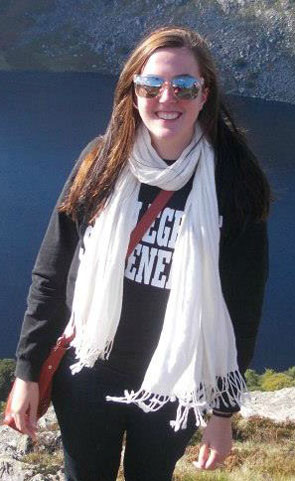 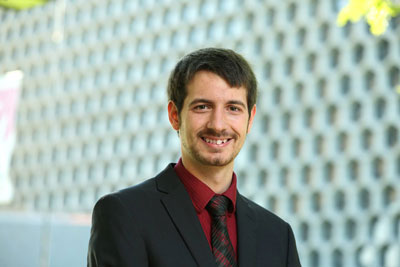 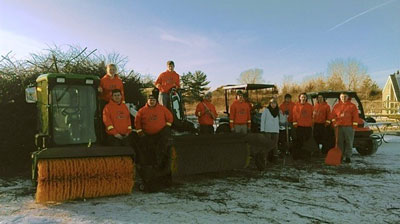 Amanda Tate, Nicholas Maher and the student grounds team at the College of Saint Benedict have been named Student Employees/Team of the Year at CSB and Saint John's University.

The winners, who receive an engraved plaque, were announced at a reception April 14 at the Founders Room, SJU. The reception included a speech by CSB athletic director Carol Howe-Veenstra, who has been a strong advocate for student employees.

The awards were presented during National Student Employee Week April 12-18. There are 2,432 student employees working at CSB and SJU, as of April 1. They work in 252 departments and offices for 299 supervisors, and have worked 426,515 hours during the current academic year.

Tate, a senior English major from Marshall, Minnesota, has worked for the CSB Athletic Department for four years, including two summers. She began as an office assistant, became the home contest student coordinator for the last three years and served as Blazer Summer Camp lead in 2014.

Tate has scheduled and supervised student employees working home athletic events; set up game day facilities; assisted with game management and promotions; updated the department's master calendar; and, during her summer stints, was responsible for the registration, housing, meals and facilities for summer camp attendees.

"We were fortunate to have Amanda here with us in the CSB Athletic Department for four years. New student employees to the department will hear her name many times in years to come. One does not forget those that make an impact on your work and touch you in a special way," wrote supervisors Deanne Hollermann and Rachael Click on Tate's nominating letter.

A total of 18 students were nominated for the CSB Student Employee of the Year award.

Maher assists in coordinating, planning and executing faith formation events sponsored by SJU Campus Ministry, including Theology on Tap, Slice of Scripture and the Rite of Christian Initiation of Adults.

"The success of our Theology on Tap programs lies almost entirely in Nicholas' ability to create outstanding events through the use of networking, graphic design, communications and event planning," wrote Steve Drapalik, faith formation and retreats director for SJU Campus Ministry, in Maher's nominating form. "If I have a major project that needs to be to done within a specific timeframe, I know with complete assurance that I can assign Nicholas to the task, confident that he will not only go above and beyond to complete the task, but more often than not, complete it well before the deadline has even approached."

Two students were nominated for the SJU Student Employee of the Year award.

The 16-member CSB student grounds team is responsible for the maintenance and upkeep of the CSB campus, including grounds, athletic fields, practice fields, walkways, roadways and parking lots; operating equipment in a safe manner; and maintenance of campus trees, shrubs, turf and gardens.

"The team's primary goal is to help others," wrote Chris Brake, grounds director at CSB, in the team's nominating form. "Fellow students, visitors, faculty and staff are among those who benefit from their helpful actions. A more pleasant, inviting and safer campus is a direct result of their efforts."

A total of 10 teams were nominated for the CSB/SJU Student Employee Team of the Year.