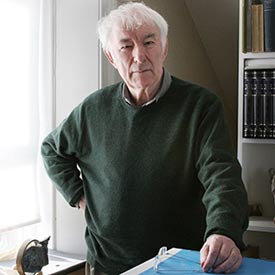 One of the most celebrated and influential poets in contemporary literature, Nobel Laureate Seamus Heaney will present readings and a commentary of his work at 2 p.m. Sunday, Oct. 2, in Escher Auditorium, Benedicta Arts Center of the College of Saint Benedict, St. Joseph.

Heaney first gained public attention in his home country of Northern Ireland in the 1960s (he now lives in Dublin, Ireland). He received the Nobel Prize in Literature in 1995 for works "of lyrical beauty and ethical depth, which exalt everyday miracles and the living past," according to the Swedish Academy which bestowed the award.

Heaney taught at Harvard University from 1985 to 2006. His anthology of poetry, District and Circle (2006), received Britain's T.S. Eliot Prize and was named as one of the "100 Best Books of the Decade" by The Times newspaper of London.

Robert Lowell, an American poet considered the founder of the confessional poetry movement, calls Heaney "the most important Irish poet since (W.B.) Yeats," and his work often voices the local surroundings and his memories of life in Ireland.

The LAI is a unique organization, founded in 1997, to foster creative writing, publishing and interaction between students and writers. The LAI brings nationally recognized authors to the college (Writers Writing), promotes literary events, holds conferences (Inside Books), supports publications (S. Mariella Gable Prize), and encourages the artistry of fine letterpress (Book Arts Studio). With its local and national partners, such as Graywolf Press, the LAI is able to bring writers and their work together with readers on campus, in Minnesota, and beyond.

For those not able to attend the reading, the event will be streamed lived on the CSB/SJU website.