Jessica Florek, Nibras Hanna and the student managers of O'Connell's Coffee House and McGlynn's Sports Café have been named Student Employees/Team of the Year at the College of Saint Benedict, St. Joseph, and Saint John's University, Collegeville.

The winners were announced at a reception Tuesday, April 12, at Gorecki Dining and Conference Center, CSB. The event was held in observance of National Student Employee Appreciation Week April 10-16. The winners receive an engraved plaque. 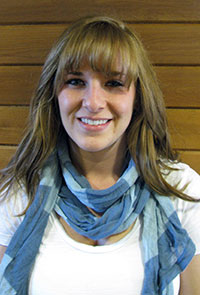 Florek, a senior management major at CSB from Circle Pines, Minn., has worked for 1½ years as a student manager at O'Connell's and McGlynn's, although she has worked at the two venues for all four years of her collegiate career.  The student manager is responsible for interviewing, hiring, training and scheduling student employees.

One of the training aids she developed for her employees was a procedure book for both O'Connell's and McGlynn's. The book gives step-by-step instructions and accompanying photos of how to make a perfect latte, cappuccino or hamburger.

"Jess mentors all the employees with the training sessions, and they have been going on through the year at the request of the student employees. She encourages all staff to learn their job to its fullest," wrote Rebecca Terwey, who was Florek's supervisor at the time of the nominating letter. Hanna, a senior computer science major from Baghdad, Iraq, has worked as a web programmer assistant for Information Technology Services since the spring of 2010. He designs, develops and troubleshoots web-based applications.

He is particularly proud of a web application and database he developed from scratch for the International Student Program Office (ISPO). The project started in May 2010, and manages data for the nearly 250 international students who attend CSB and SJU.

"This system has been affectionately dubbed by the ISPO as 'System Nibras,' " said Randy Hammond, Hanna's supervisor at IT Services, in his nominating letter. "Through his student employment position, Nibras has repeatedly proven himself as a hardworking and dedicated employee." 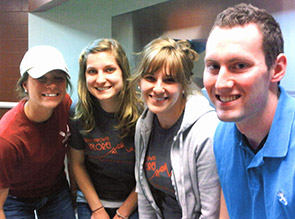 The four-person student management team for O'Connell's and McGlynn's makes sure the venues run efficiently and effectively. They work on the scheduling, training, disciplinary action, organization, updating of procedures and marketing and public relations. The team hired an additional 60 student employees to staff McGlynn's when it reopened last August as a sports café.

"Through the year, they took on new roles and responsibilities each and every day," said Terwey, the team's supervisor at the time of the nominating letter. "They worked as a cohesive group, openly communicating their needs and expectations of each other and being a support system through stressful times. While their new roles were not at all what they originally had been hired to do, they dived in and took it on without hesitation."

The student team in the SJU President's Office was also nominated for Student Team of the Year.

Watch the slideshow featuring all the nominees.