Saint John’s University announces the establishment of The Eugene J. McCarthy Lecture to honor one of its most distinguished graduates.

During seven years as a student at Saint John’s Preparatory School and University and nearly a year as a member of the Benedictine community of Saint John’s Abbey, McCarthy was exposed to significant spiritual and intellectual movements – monasticism, liturgical renewal, social action, ecumenism, liberal arts – which he integrated into the fabric of his personal and professional life.

Late in life, McCarthy expressed his hope “that future generations of students are exposed to the same intellectual movements I encountered as a student at Saint John’s.”

“By establishing The Eugene J. McCarthy Lecture, Saint John’s seeks to ensure that the memory and legacy of this remarkable and courageous man will live on as a source of inspiration for generations to come," said Br. Dietrich Reinhart, OSB, president of Saint John’s University. “Gene McCarthy embodied values at the heart of Benedictine life and reckoned deeply with Catholic teachings on social justice and personal integrity. He was a man whose college education and religious formation prepared him to lead others by manifesting a Christian conscience in his writing, speaking and actions.”

Reinhart added, "This lectureship will further Senator McCarthy’s commitment to democracy, and it will advance his resolve to ‘restore faith in the processes of American politics and government.’”

The McCarthy Lecture will be a centerpiece of the Center for Public Policy at Saint John’s University and the College of Saint Benedict.

“I sincerely hope that one day soon the lectureship will evolve into a full-fledged endowed Chair in honor of Senator McCarthy,” noted Reinhart. “Gene dreamed that one day such a program would focus on ‘social justice and its relationship to economic history and moral teachings of the Catholic Church.’”

The lectureship will carry on McCarthy’s deep commitment to the ideals and principles of democratic self-government. It will seek to inspire a new generation of young people to pursue fresh ideas, to challenge the status quo, to effect positive change in their communities and, like McCarthy himself, to lead with honesty, integrity and courage.

To reflect McCarthy’s interests, this lecture series will be comprehensive in scope. It will emphasize, in McCarthy’s words, “the projection of the spiritual and intellectual ideals that I was first exposed to at Saint John’s into politics and government.”

In expressing the McCarthy family’s appreciation to Saint John’s for establishing a lectureship in honor their father, Michael McCarthy stated, “The scope of this series promises to stimulate the kind of thoughtful discussion our father sought to promote in his public and private life—discussion informed not just by policy and politics but also by poetry, philosophy and by concerns of the people, whose voice too often goes unheeded.”

McCarthy, who died at age 89 on December 10, 2005, was a seminal figure in Minnesota and national politics in the last half of the 20th century. He was a five-term member of the U.S. House of Representatives, a two-term U.S. Senator and a three-time presidential candidate. He changed the course of history when he sought the presidency in 1968, galvanizing popular opposition to the war in Vietnam, forcing President Johnson from office and hastening the end of a war that cost more than 58,000 American lives.

Memorials to the Eugene J. McCarthy Lecture may be made to: 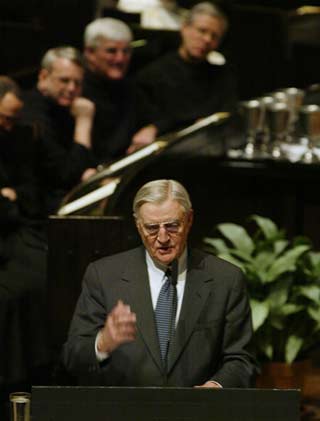