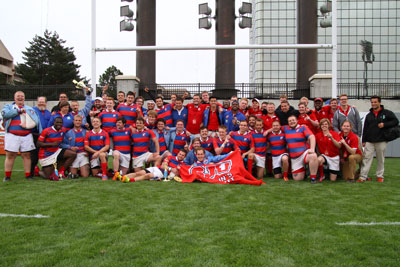 SJU senior full back Joe Thompson was named the tournament's Most Valuable Player.

It was just the third time in the tournament's history that a team has recorded back-to-back national championships. Furman University captured three straight championships from 2003-05, and Bentley University won two titles in 2006 and 2007.

"It was a tough match," SJU co-coach Dan Franklin said of the championship game. "We came out after halftime and stuck with our game plan."

The Johnnies advanced to the championship game with a 42-33 semifinal win over the University of Denver Saturday, April 26. It marked the second year in a row the Johnnies defeated the Pioneers in the semifinal round.

Franklin credited the Johnnies' pre-tournament conditioning to their play in the mile-high altitude of Colorado.

"We focused on our cardiovascular conditioning," Franklin said. "We tried to do as much as we could to get accustomed to the altitude. I think it paid off for us."

SJU senior full back Joe Thompson (Detroit Lakes, Minn.) was named the tournament's Most Valuable Player. He scored a total of 36 points in the two tournament games — two trys (a try is worth five points each) and 26 points kicking (10 of 11 on conversion kicks, and 2 of 3 on penalty kicks).

The Johnnies' fly half Tony Bauer (senior, Chaska, Minn.) was awarded the Heart and Soul Award. One player from each of the four teams in the tournament received the award. He scored a try in the semifinal match.

Saint John's qualified for the national championship by winning the Central Regional tournament in November in Elkhart, Ind.

Rugby is a club sport at Saint John's. A total of 215 teams competed for the National Small College championship, which is based on men's enrollment (schools must have fewer than 4,500 male students to compete in this division).