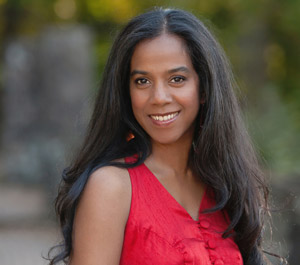 Author Ru Freeman will read from her book, "On Sal Mal Lane," at 7 p.m. Wednesday, Oct. 23 in the Gorecki Family Theater, Benedicta Arts Center of the College of Saint Benedict, St. Joseph, Minn.

"On Sal Mal Lane," which received the 2013 Sister Mariella Gable Award from CSB, describes the tremors in a Sri Lankan community five years before the country's civil war. The event is free and open to the public.

Freeman will also be in residence at CSB from Oct. 21-25 visiting classes and spending time with students from the College of Saint Benedict and Saint John's University.

Freeman was born and raised in Colombo, Sri Lanka, to a family of writers. She studied at Murdoch University in Western Australia before arriving in the United States to attend Bates College in Maine. After completing her master's degree in labor relations at the University of Colombo, Freeman began working in the field of American and international humanitarian assistance and workers' rights.

Freeman credits her family and country's pasts for her inspiration to become a political and creative writer. Her political writing emphasizes universal humanitarian support and workers' rights, while her creative writing has been highlighted in Guernica and World Literature Today magazines. Her first book, "A Disobedient Girl," (2009) was long-listed for the DCS Prize for South Asian Literature and translated into several languages.

The Sister Mariella Gable Award honors a revered member of the CSB monastic community who was a poet, writer, editor, Dante scholar and specialist in new fiction. She was also an English professor at CSB, teaching at the school for 45 years from 1928-73. Gable played an important role in the early careers of such writers as Flannery O'Connor, Betty Wahl and J.F. Powers.

CSB awards the Sister Mariella Gable Award to important works of literature that have been published by Graywolf Press. Graywolf Press and the Literary Arts Institute (LAI) at CSB have formed a partnership, exploring innovative ways to promote the literary arts on campus, to audiences in the surrounding area and in the Twin Cities.

In addition to the reading at CSB, Freeman will read at 7 p.m. Thursday, Oct. 24 at Common Good Books, 38 S. Snelling Ave., St. Paul, Minn. The event is free and open to the public as well.