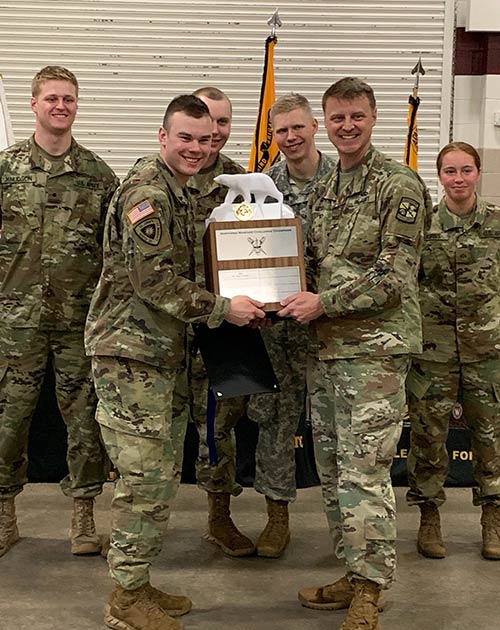 It’s a place to grab a bite to eat, have a beverage or simply enjoy the view some 590 feet above the city along the Mississippi River.

It’s also a place a five-member team from the Fighting Saints ROTC Battalion completely ignored while hiking to Grandad Bluff as part of a 23.2-mile Northern Warfare Challenge on Saturday, Feb. 23.

For good reason. The team, made up of four ROTC cadets from Saint John’s University and one from the College of Saint Benedict, captured first place in the fourth annual challenge.

This was no ordinary hike. It began at the Onalaska (Wisconsin) Armory with the cadets – juniors Calin Techam and Jacob Knudson, sophomore Dean Amundson and first-year students Maureen Burns and Mason Heimer – each carrying 40-pound backpacks.

They traversed trails and fields before reaching Grandad Bluff, the halfway point of the challenge. The team then turned around and completed three challenges – making a fire from scratch; a weapons challenge consisting of a slingshot lane, a bow and arrow lane and a blow-dart gun lane; and pulling one of their members in an ahkio sled for four miles - before returning to the Armory.

Twenty-five teams representing 21 schools competed in the challenge. Eighteen teams were eliminated at the halfway point of the challenge for not beating a time standard, and just three teams completed the event.

One of the teams that dropped out during the second part of the challenge due to injury was a second team from the Fighting Saints Battalion.

“The University of Wisconsin-La Crosse has been conducting a Northern Warfare Challenge for some time now,” said Maj. Steve Beard, professor of military science and head of the Fighting Saints ROTC battalion that includes student cadets from CSB, SJU and St. Cloud State University. “Four years ago, it became an official Third Brigade ROTC event.

“We actually haven’t competed prior to this year,” Beard added.

Actually, the Fighting Saints Battalion team had one major advantage to the other teams.

“Earlier in the semester, we trained here on campus on Lake Sag (Sagatagan) using snow shoes. So, we sent our teams with snow shoes, which helped them in the deeper snow,” Beard said.

With two of his teams being in the final seven, Beard said he was proud of both teams and the coaching of Sgt. 1st Class Brian Wright.

“We have a lot of cadets that are into winter camping and they ice fish. Culturally, this is something we kind of embrace in winter,” Beard said. “It’s also a valuable skill that people are going to look back on during active duty.”