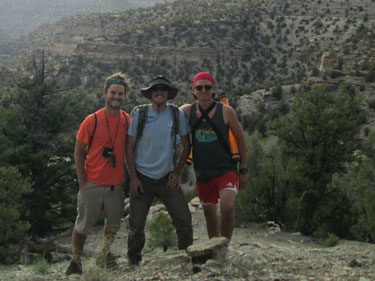 Environmental Studies Assistant Professor Troy Knight dances when one of his students finds old wood, especially wood from a tree that germinated in 335 B.C., when Alexander the Great was 21 years old.

They are two senior environmental studies students at Saint John's University who accompanied Knight on a summer research project to northeastern Utah and northwestern Colorado. The students went on two separate trips in June and July where they collected tree ring samples.

Summer research fellowships are available for College of Saint Benedict and Saint John's University students in departments across campus. This year, 70 students from CSB and SJU participated in an undergraduate summer research project.

Knight, Roske and Bradley are using the tree ring samples to reconstruct past climate conditions in northeastern Utah and northwestern Colorado. They also collected samples of wood from fallen trees. Utah has a cool and dry climate that preserves the wood so it doesn't decay as fast as in wetter climates. 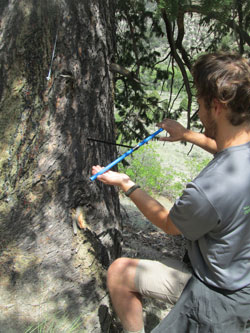 In this part of the west the width of a tree ring is highly dependent on the amount of moisture in the soil. Typically the cooler the temperature and the greater the amount of rainfall, the wider the tree ring.

The Colorado River is a crucial source of water for the southwestern United States. Studying tree rings can give insight into some of the worst droughts that have occurred in the Colorado River Basin in the last 2,500 years and will help environmentalists plan for worst-case scenario.

Knight and other researchers developed a timeline using tree rings that goes back more than 2,300 years. Knight said through their research they have found a series of severe droughts between 900 A.D. and 1,300 A.D. "A 2,000-year record could put the droughts into perspective. The longer your record in any paleo work gives you more confidence in making predictions."

Knight started the project three years ago stemming from his doctoral dissertation. He began collecting sections from long dead trees and core samples from Utah at a tree site called Wells Draw. His initial research helped develop a 2,500 year-long timeline using pinyon pine trees.  Knight wanted to know if the site was an anomaly. That question led to the summer research project.

Roske and Bradley spent their summer collecting slices of wood from nearly 260 dead trees and core samples from live trees. It was Roske's second summer working on the research project. "You don't know what you find until you come back to the lab," he said. "The success of this summer completely dwarfed that of last summer."

This year Knight and his students had to take two trips because the first trip was so successful. The students ended up finding wood from trees that germinated in 335 B.C. Knight, Roske and Bradly realized the wood predated their current timeline. "Our findings warranted another trip back to Utah," Bradley said.

"We're supposed to be sort of skeptical ... Just because something small matches up, you don't freak out. You want to confirm the whole sample. After the first (B.C.) piece, we were like 'Wow, that's amazing.' After the second, third and fourth, we were like 'OK, what's really happening?'"

Knight said, "I dance when it's exciting. This is hard and sometimes tedious work. You have to celebrate when you find what you are looking for. J.J. shared some of that frustration last year when the field and lab work was less successful. The wood is either there or it isn't. This summer was magical." 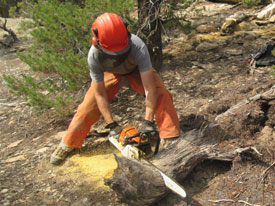 The group will analyze the wood samples in a lab for the next few months to create a new database of ring measurements.

"We have to learn how to identify good samples in the field," said Roske. "We have to come back and assemble the samples, sand them down, prepare them to study and slog through all of the work. We're actually doing this with a pencil, paper and a piece of wood. I think it gives you a sense of satisfaction when you get something right, and it turns out to be really old."

When that process is completed, they will be able to use statistical techniques to reconstruct past patterns of stream flow and moisture.  Water resource managers in the region will be able to use that information to help refine a water management plan in case of a severe drought for states along the Colorado River like Arizona, California, Colorado and Utah.

"My greatest take-away was that I was able to be part of a really unique project," Bradley said. "It is just a very unique work experience and it's just beneficial to see what I can do in my field coming up after graduation."