Vandana Shiva, Ph.D., a world-renowned environmental thinker and activist, will visit the College of Saint Benedict as the 2010-11 Renaissance Series speaker.

She will speak on the global food crisis, gender justice and the environment at 7 p.m. Monday, Feb. 14 in room 204, Gorecki Dining and Conference Center, CSB. The event is free and 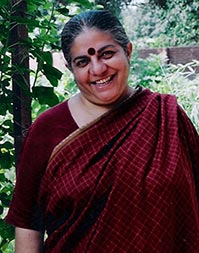 open to the public, and is one of a series of events included in the 2010-11 Year of Sustainability.  Shiva will also meet with students during her visit to campus.

Shiva has fought to change practices of agriculture and food in the world, and is widely recognized as a world leader in environmental policy and philosophy. She was born in Dehradun, India, and pursued research in environmental policy and technology in Bangalore and obtained her Ph.D. in nuclear physics at the University of Western Ontario in 1979.  She was considered one of India's leading physicists prior to beginning her work as an activist.

A prominent figure in the founding of the Green Movement in many nations, Shiva is a leader of the International Forum on Globalization.  She has addressed both the World Trade Organization and World Economic Forum.

Shiva was recognized by Time magazine as an environmental hero and received the Globe 500 Award from the United Nations.

In 1982, Shiva founded the Research Foundation on Science, Technology, and Ecology that would eventually create Navdanya, an Indian national movement to protect diversity, natural resources, organic farming and fair trade. She has authored numerous books including Water Wars: Pollution, Profits, and Privatization and Biopiracy: The Plunder of Nature and Knowledge.

Serving the College of Saint Benedict and Saint John's University, the Renaissance Series was established by CSB President MaryAnn Baenninger in 2006 to bring speakers to CSB who "demonstrate the diversity of opportunities available for women and men and . . .  to encourage them to broaden their horizons in every respect, particularly in areas that are less traditional for the respective genders." This event is co-sponsored by the CSB Institute for Women's Leadership.