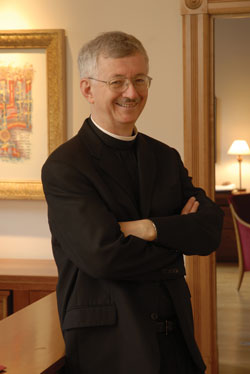 A tribute was held for the late Saint John’s University President Emeritus Br. Dietrich Reinhart, OSB, at the annual Saint John’s Day on Friday, April 17, in Sexton Arena on the Saint John’s campus.

The evening included the presentation of several posthumous awards, including the Fr. Walter Reger Distinguished Alumnus Award and honorary Doctor of Laws degrees from Saint John’s University and the University of St. Thomas.

A musical tribute in honor of Reinhart was provided by George Maurer, SJU ’88. The SJU Men’s Chorus performed and Bela Petheo, professor emeritus of art, unveiled a portrait of Reinhart.

The Fr. Walter Reger Award is the highest honor presented by the Alumni Association and recognizes an alumnus for his outstanding volunteer service to the Saint John's community. Reinhart is the 40th alumnus to receive the award.

The Fr. Walter Reger Award is named after the longtime secretary of the Saint John's Alumni Association. Known as "Mr. Saint John's," Reger was a dean, history professor, prefect, member of the university orchestra and purveyor of Johnnie Bread. He befriended hundreds of Saint John's students and kept up personal correspondence with many of them after they graduated. Reger died in 1971, and the Alumni Association Board of Directors launched the award program later that year.

The Doctor of Laws honorary doctorate is regarded as the most appropriate award for a person distinguished in general service to the state, to learning and to humankind.

On March 24, Minnesota Rep. Michele Bachmann honored Reinhart for his lifelong dedication to service in Collegeville, Minn., and the Catholic collegiate community. Bachmann published a statement in the Congressional Record, the official record of the proceedings of the House of Representatives.