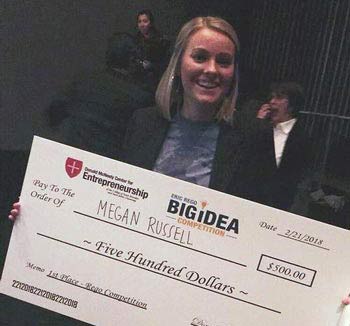 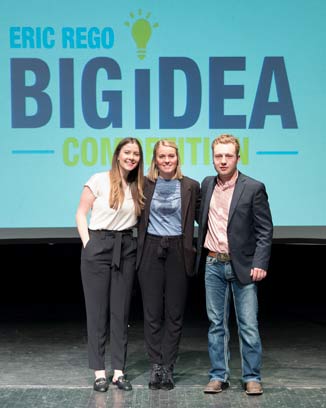 You know it is a really huge event when the winner gets a giant check. Heck, Happy Gilmore had a whole backseat full of giant checks in the movie of the same name.

Now, Megan Russell can start her own collection of giant checks.

The College of Saint Benedict senior won $500 — printed on a giant check — at the 10th annual Eric Rego Big Idea Competition Feb. 21 at the Gorecki Family Theater, Benedicta Arts Center, CSB. The event is named in honor of Eric Rego ’06, who was a member of the first Entrepreneur Scholars cohort from the Donald McNeely Center for Entrepreneurship and was known for developing ideas. Rego passed away in 2008.

About 300 people attended the event, which was sponsored by the McNeely Center. It gave 10 contestants a chance to pitch a new business or product to a panel of judges – all in 90 seconds.

Russell pitched an idea known as “Produced for You” that would distribute food that grocery stores can no longer sell due to regulations to needy members of a community via a food truck. She was surprised she won the competition.

Why? She flubbed a line of her pitch.

“During my pitch, I kind of forgot an entire sentence, and left out the whole piece about donating the food for free piece,” said Russell, a global business leadership and communication double-major from Champlin, Minnesota.

No problem, though. She was one of five finalists selected by judges as the field was cut to five following the pitches.

Four non-voting panelists – Devin O’Brien '05, the founder of Search and State; Mary Bruno, owner of Bruno Press in St. Joseph; comedian Joey Hamburger '13; and Margaret Murphy '90, CEO of Bold Orange, a human connections company which acquired Great Lakes Script Center, the largest gift card fundraising company in the country – then asked a series of questions to the remaining finalists to determine the winner.

“I was hoping that I’d get (to the question session),” Russell said.

“My brother and I actually came up with this idea quite a while ago, a few years ago,” said Russell, who said she spent about three or four weeks researching, developing and fine-tuning her pitch. “It’s something both of us are passionate about.”

This was the first time Russell tried her hand at the competition.

“I think this competition in general is very important because it draws in a lot of different people,” she said. “It lets people share what they’re passionate about and what they’re excited for.

“In my view specifically, I think it was extremely important with the whole food waste and sustainability aspect, and decreasing food insecurity as well in community,” Russell said.

The tone of the event was fun, however. Host Ryan Wold '13 kept the event light, but he had some help.

SJU senior Brett Templin, a senior global business leadership major from Waunakee, Wisconsin, received a loud ovation when he cracked open a beer at the end of his pitch for “Beer for Cattle,” which would take brewery waste (wet corn) and sell it to farmers to feed their cattle.

“I’m from Wisconsin, and what are we known for? Beer!” said Templin, who placed second and earned $300.

Placing third and winning $200 was Clare Durand, a sophomore global business leadership major from Eagan, Minnesota. Durand, who said she suffers from “low battery anxiety,” made her pitch for “Battery Buddy,” which would allow a person with a low battery charge on their phone to receive a battery power transfer from another phone.

A total of 112 video entries were originally submitted to the competition. That nearly doubled the number of entries from 2017, said Kelli Gradin, coordinator for the McNeely Center.

From that, a panel of judges reduced the field to 10.